It's the bad word 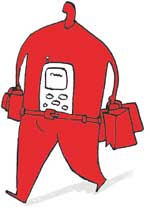 Venezuelan president, Hugo Chavez is known for political stunts. But he has outdone himself this time. In the second week of May, Chavez launched Vergatorio: costing US $15 it's billed as the world's cheapest mobile phone. The gadget is not in question, its appelation is: Vergatorio is a Venezuelan slang for penis.

But at the phone's launch Chavez waxed eloquent: "It has all the features of a more expensive phone such as an MP3 player and is light and cheap".

"This telephone will be the biggest seller not only in Venezuela but the world. Whoever doesn't have a Vergatorio is nothing," he said. After the launch Chavez called up his mother with the new device.