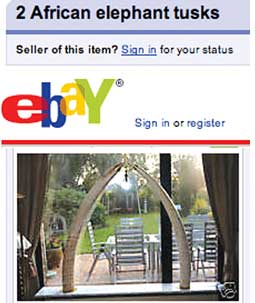 The online auction site eBay has promised to ban ivory sales after investigators found thousands of items made from elephant tusks on sale. However, the new policy goes into effect in January, 2009 and eBay will continue to allow antiques that contain only small amounts of ivory on the site, specifying that only items made before 1900 will qualify.

e-Bay's new policy comes in the wake of a widely-publicized International Fund for Animal Welfare report.

The organization claimed that in a six-week long study it had found 4,000 ivory trinkets for sale on the Internet around the globe.

E-Bay, according to the report, was responsible for two thirds of the illegal trade in ivory and other wildlife products. "The lack of policy enforcement makes eBay the largest digital marketplace in the world for ivory that may violate national or international law or website policy," according to the group's spokesperson Jeff Flocken.