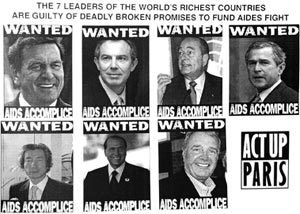 mixed signals emanated from the xv International aids Conference 2004, held recently in Bangkok, Thailand's capital. While the meet proceeded in the desired direction by recognising the link between development and the battle with aids, it also witnessed the industrialised countries' indifference towards the less privileged sufferers of the disease. Estimates of the tightening grip of the killer disease, especially in Asia, compounded the resulting despair.

As many as 38 million people live with hiv/aids worldwide, including 1.1 million in Asia infected last year, according to a new report of unaids, the un programme on hiv/aids. India has an estimated 5.1 million infected people. un secretary general, Kofi Annan, set the tone of the meet in his inaugural address by calling hiv/aids a development issue, closely linked to poverty, malnutrition and lack of healthcare facilities. The development link is very pronounced in Sub-Saharan Africa, home to over two-thirds of infected people. "There is increasing recognition that lack of food security, basic health services and access to affordable medicine contribute to the spread of aids," said Prem Chandran John of People's Health Movement, an international grassroots group of health workers and professionals.

Although global spending on aids has increased 15 fold, from us $300 million in 1996 to just under us $5 billion in 2003, it is less than half the projected requirement of developing countries by 2005. Peter Piot, executive director, unaids, urged donors to fulfill their promises and advocated debt relief for African countries. But his views were not endorsed by all. Among them were the us, some European countries and multinational drug companies that hiked drug prices in developing countries by imposing process patents. These forces invited the flak of non-governmental organisations and activists.

There were some positive moves also. The eu pledged an extra us $52 million and Bill and Melinda Gates Foundation us $45 million to the Global Fund to Fight aids, Tuberculosis and Malaria. The meet also witnessed a growing recognition of the groups more susceptible to hiv infection. Such concerns found expression in a "community statement" and the Bangkok Declaration adopted at the conference.