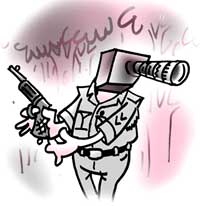 After the killings of two Communist Party of India (Marxist) leaders and a cop in southern West Bengal in early July were blamed on Maoist extremists, police investigators have come under increased public pressure to curb insurgent activities. While Special Task Forces had already been set up to track the groups down, after the July attacks Bengal's police got outfitted like James Bond. Special Forces now ride in reinforced vehicles and tote modern weaponry; they have also begun to peer into dark forests across the state with new surveillance equipment.

Earlier this month, home department officials in Kolkata confirmed that spy cameras had already been placed at strategic vantage points in Bengal's forests.

Although currently only being used on a limited experimental basis, plans are reportedly in place to install the spycams in forests in West Midnapore, North and South 24 Parganas districts, as well as certain areas in Kolkata.