Jammu and Kashmir was unprepared for flood fury 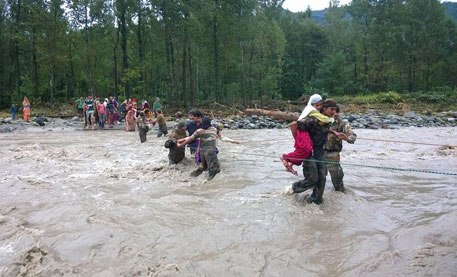 The devastating floods in Jammu and Kashmir that has so far claimed 150 lives and displaced hundreds of thousands was unforeseen. The state, because of its history of conflict, was not as privileged as the other Indian states to have a flood forecast system or a disaster management plan in place.

While rivers in spate continue to engulf homes in the state, the Central Water Commission says “lack of pre-requisite requirements” is to be blamed for absence of flood forecasting system in the state. Even when the state falls in highly active seismic zones IV and V, the state administration sat on the plan for disaster management.

The scale of damage to infrastructure and crops in the state due to floods and landslide triggered by heavy rainfall is still being assessed. Since the roads and highways were blocked, 25,000 pilgrims headed to Vaishno Devi shrine were trapped in Katra.

“The question is not whether Jammu & Kashmir had a disaster management plan or not. The question is did the state ever realise that it is vulnerable to floods,” says a senior official of the National Disaster Management Authority (NDMA).

According to National Institute of Disaster Management’s profile for Jammu and Kashmir, the state is prone to flashfloods. The region was ravaged by floods in 1992, but with the increased scale of damage, it seemed like a recap of 1959 floods, the worst recorded in the state in recent history.

River Jhelum, that is flowing five feet above the danger mark, has inundated over 100 villages. The most affected districts are Anantnag, Kulgam, Shopian, Pulwama, Ganderbal, Srinagar and Badgam.

According to Skymet, a private weather forecasting agency, September is the least rainy month for the state. But in the past two days, places like Banihal and Qazigund witnessed over 200 mm of rain. The normal rainfall for September is only 26.6 mm for Srinagar, but the summer capital of Jammu and Kashmir has recorded 51.8 mm of rain in the past 24 hours. It is the highest amount of rain in Srinagar in a span of 24 hours during this month in the past one decade. The situation is similar for Qazigund, which received rainfall of 156.7 mm over the past 24 hours. The city has crossed its 10 year high for a span of 24 hours, which was 151.9 mm in 1992. The monthly rainfall for the city is, on an average, 56.4 mm. 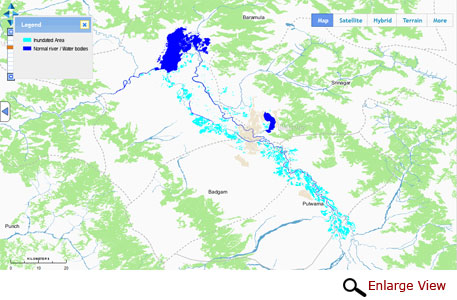 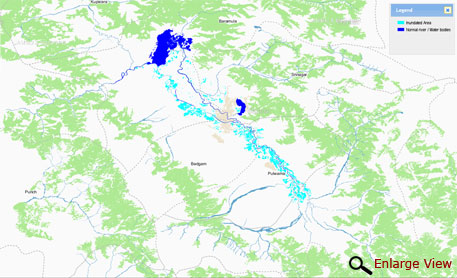 The state government had approved a three-tier Disaster Management Policy in February 2012 to put in place a proper mechanism for rescue, relief and rehabilitation of disaster victims. But, according to sources, the state government could not create a separate department which would only deal with disasters. Sources say that disaster management in Jammu and Kashmir is not managed by an autonomous body, but managed by respective divisional commissioners or deputy commissioners of the area. In absence of full time members, proper policies to handle disaster and risk reduction are not in place,” says an official of NDMA.

Divisional commissioner of Kashmir, Rohit Kansal, and joint secretary of disaster management in ministry of home affairs, G V V Sarma, could not be contacted as their phone was out of reach due to collapse of phone connectivity in the region.

Meanwhile, Indian Army has rescued about 15,000 people in the state. Seventy boats and five teams of the National Disaster Response Force (NDRF) have been deployed for rescue and relief of flood-affected people. Control rooms have been set up at Srinagar, Jammu and New Delhi to monitor and coordinate the rescue and relief operations. Indian Air Force airlifted about 180 jawans from flood-hit border posts along flood-affected India-Pakistan border in Jammu sector.

Earlier on Sunday, Prime Minister Narendra Modi announced a special assistance of Rs 1,000 crore for the flood-hit state besides a Rs 2 lakh compensation from the Prime Minister's Relief Fund for the kin of the dead and Rs 50,000 for those seriously injured. Modi, who undertook an aerial view of the flood-affected Jammu and Srinagar regions, said the current crisis was a "national level disaster".

Havoc in the Himalaya