Jan Dhan Yojana: Can 10 million bank accounts be opened in one day?

Calculations show each of the 60,000 camps being organised today by bank branches across rural India would have to process as many as 167 accounts on an average to achieve this target 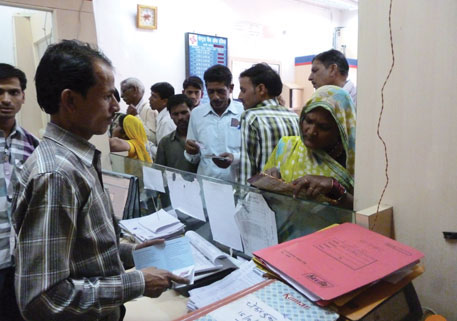 Prime Minister Narendra Modi's ambitious Pradhan Mantri Jan Dhan Yojana, which is a continuation of the earlier government's financial inclusion plan (FIP), takes off today. The aim of FIP is ensure that all the 750 million unbanked households across India have access to core banking services and have at least one account each. For the launch of the renamed scheme, the prime minister set an unbelievable target for the first day (August 28): open 10 million bank accounts through 60,000 camps organised by bank branches across rural India.

But this target seems near impossible to achieve if one were to do some basic number crunching and see past trends. According to Reserve Bank of India’s annual report, only 100 million accounts have been opened in the first phase of FIP between 2010 and 2013. (The first phase, that ended in March 2013, aimed at bringing all villages with more than 2,000 people within the formal banking system.)

Going by the past trend and given the present banking infrastructure, it would take at least four months to open 10 million bank accounts.

But if the gigantic task of opening 10 million accounts is indeed accomplished in one working day (August 28), as directed by the prime minister, then one would be led into believing that universal coverage of all unbanked households (750 million) would be possible in just one week.

Modi government's target to achieve universal financial inclusion is, however, not one week but the next Independence day. The question then is: why did he choose one day to open an astounding 10 million bank accounts?

Prime Minister Modi seems quite optimistic that the target for the launch of the programme is achievable. But ground realities are somewhat different.

Public sector banks are presently struggling because of lack of manpower, banking correspondents who do not have enough incentives to work, financial illiteracy and other banking infrastructure shortcomings. A rural branch in a far flung area usually does not have more than three staff members to manage rural business—a manager, a cashier and a clerk. They are already burdened with routine tasks. Now they are organising camps and have to open new accounts within the stipulated deadline.

According to a manager of a rural branch of Central Bank of India in Sagar district of Madhya Pradesh, one new account processing time takes at least 20 minutes if no technical problem arises like poor Internet connectivity and electricity cut. If everything is on track, a bank official can open 24 accounts in the eight working hours in one day. Even if an official works 12 hours, this number would reach just 36. But the target is to open at least 166 accounts (see calculation below). This means the target set by Modi can be achieved only if one account is opened every three minutes.

A few banking correspondents (BCs) in Sagar and Narsinghpur districts of Madhya Pradesh, whom Down To Earth spoke to, sounded very indifferent towards the the camps. (The government this time is focusing on villages with populations between 1,000 and 1,500.)

“I was not informed about such a camp,” says Govind a banking correspondent in Sagar district.

A senior bank official said, “without giving any financial motivation to BCs this uphill task is not going to be achieved in near future. Even we succeed in opening the accounts, we cannot run it.”

Another bank manager of Gramin Bank of Narsinghpur district said opening of accounts this time will not be troublesome. “There is a provision of overdraft facility of Rs 5,000 after six months and RuPay Debit card with inbuilt accident insurance cover of Rs 1 lakh and RuPay Kisan Card on opening of bank accounts is attracting people to come to our banks,” he says.

In spite of the incentives provided by the new NDA government to open bank accounts, doubts persist over achieving FIP targets.

The previous UPA government claimed it had achieved the first phase of financial inclusion plan, but ground reality and facts belie this claim. RBI’s annual report states that 119,000 villages have been covered under FIP. But according to Census 2011, the country has only 115,000 villages with population of more than 2,000 people (targeted under first phase of FIP). These villages comprise more than half of the rural population—400 million. What's more, RBI’s annual report clearly states only 100 million accounts have been opened in the first phase.
Web edition Web edition News News News Pradhan Mantri Jan … Narendra Modi FIP Financial Inclusion Plan Down to earth
SUPPORT US