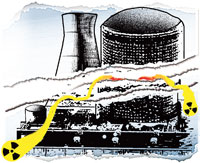 According to the cables released by Wikileaks, an official of the International Atomic Energy Agency told Japan’s nuclear officials in 2008 that its safety rules were out of date and strong earthquakes would pose a “serious problem” for nuclear power stations.

The Japanese government pledged to upgrade safety at all of its nuclear plants, but will now face inevitable questions over whether it did enough. A US embassy cable obtained by WikiLeaks and seen by the UK paper, The Daily Telegraph, quoted an unnamed expert who said that guidelines on how to protect nuclear power stations from earthquakes had been updated only three times in the past 35 years.

The cables disclose how the Japanese government opposed a court order to shut down another nuclear power plant due to concerns that it could not withstand powerful earthquakes. The cables reveal how Taro Kono, a high-profile member of Japan’s lower house, told US diplomats in 2008 that the government was covering up nuclear accidents. He alleged that the government was ignoring alternative forms of energy such as wind power.