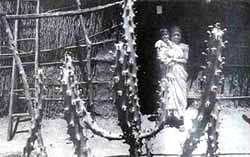 JAPANESE environmentalists have objected to an Indian press report, which said Japanese non-governmental organisations had welcomed India's resettlement and rehabilitation (R&R) package for oustees of the Sardar Sarovar Project. In fact, Yukio Tanaka, coordinator of the Narmada Action Committee of Japan, has denied this outright.

The controversy erupted on February 8, 1994, when the Pioneer reported: "Japanese NGOs have welcomed the Indian government's rehabilitation package and the announcement that NGOs would be associated with the monitoring of rehabilitation measures." The report said the Japanese had agreed to provide $2.8 billion credit for the project and that India's environment minister Kamal Nath had convinced the Japanese that satisfactory R&R packages had been worked out.


However, Kaoru Hayashi, director of the Overseas Economic Cooperation Fund of Japan, refuted the report. And, Shigeki Wakayama, a journalist with the Asahi Shimbun in Osaka, in a fax message to Down To Earth, said, "The minister made a 40-minute, one-way, general speech on the environment of India to Japanese NGO representatives and only in the last five minutes did he talk about the Narmada project."

Interestingly, in a letter to Gurjit Singh, first secretary of the Indian embassy in Tokyo, Tanaka had already pointed out that Japanese NGOs were "unanimously dissatisfied with the style and content of the meeting and the presentation done by the minister". Ministry officials are, however, tight-lipped. All that Nalini Bhatt, joint director in the ministry, said was that she was "not aware" of the real story.

Earlier, prompted by an appeal from Japanese parliamentarians, the World Bank had threatened to withdraw all loans to India. The Japanese parliament had acted upon a November 1993 letter from the Narmada Action Committee (NAC), an international network of NGOs that supports the Narmada Bachao Andolan in India, that demanded the World Bank admit their legal responsibility for the situation.

NAC said future non-project credits to India from the International Development Association must be made conditional upon resettlement conditions being met. Besides, World Bank president Lewis Preston received a similar appeal from 25 members of Finland's parliament and a resolution echoing these demands was tabled in the British parliament.

Thirty-two members of the Japanese parliament had warned: "As representatives of the second largest World Bank donor, we cannot allow this disastrous situation to go unheeded." In a letter to the ministry of water resources in January, Heinz Vergin, director, India country department of the World Bank, said that in the absence of assurances that R&R programmes are properly implemented, "support from the World Bank would be difficult to sustain".

Vergin's letter said India must abide by the agreements on R&R. A leaked internal memo from World Bank vice-president Ibrahim F I Shihata said India "is still legally obligated towards the Bank to carry out its obligations under the agreements".

However, the Bank is yet to admit its legal responsibility for the project. Ridley Nelson, chief of the World Bank's agriculture division in New Delhi, said the Bank is collecting data for a project report. "We have been doing this at regular intervals," he remarked.

N Suryanarayanan, joint secretary in the ministry of water resources, said that the Bank was concerned about the plugging of sluice gates, but pointed out that the people who could have been affected by it had been rehabilitated.

Grist has been added to the rumour mills because two days before Vergin's letter, at a meeting between the Prime Minister, the finance minister and the chief ministers of Gujarat, Madhya Pradesh and Maharashtra, the states were asked to monitor the R&R measures.