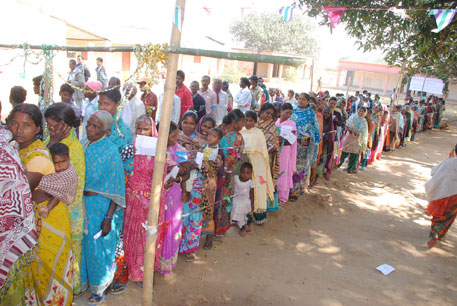 In the first phase of polling in Jharkhand state election, voters from 13 Assembly seats created a record—the voter turnout on Tuesday in these segments averaged 61.92 per cent, which is the highest polling percentage in the state in the past three Assembly elections in the state after it separated from Bihar.

This was despite the fact that almost  all the constituencies that went to polls in phase one—Latehar, Manika, Chatra, Lohardaga, Panki, Manika, Bishunpur, Daltonganj, Bishrampur, Chattarpur, Hussainabad, Garhwa and Bhavanathpur—are affected by Naxalism.

The massive turnout of voters has given the jitters to political parties in the fray. They are now reevaluating their campaign strategy and contemplating more emphasis to development-related displacement, rehabilitation and deforestation, which were always given prominence in earlier elections but have been given a go by this time round.

Record polling of voters was reported from Bhavanathpur constituency. The voter turnout in this Assembly segment was 69.60 per cent.

Political observers are interpreting this high turnout as sure indication of a decisive mandate and shift from past trend of fractured mandate. 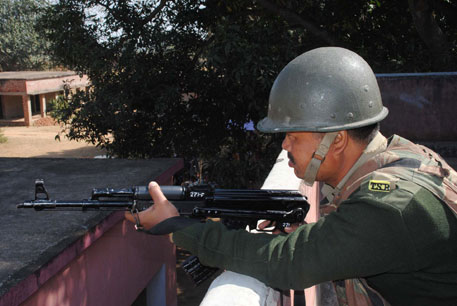 While the voters of 13 constituencies were casting their mandate, Prime Minister Narendra Modi was campaigning in Chaibasa where he revived the traditional slogan of “jal, jungal, zameen” (water, forest, land).

“The forests and land of Jharkhand has abundant natural resources like iron ore, bauxite and other minerals, which should have made this state rich,” Modi said. He advised people in the rally that a clear mandate and stable government would give strength to Bhartiya Janta Party to chalk out people-friendly mining and development policies.

His speech triggered had a ripple effect on other political parties. Supriyo Bhattacharya, general secretary of Jharkhand Mukti Morcha, said  the voter turnout was unexpected. “We will now include people’s agenda during campaigns for next four phases. It will include mining, deforestation and livelihood issues,” he said.

Chief election officer of Jharkhand, P K Jajoria said that heavy security arrangement and people’s motivation has resulted in massive polling in the state. “We are now focusing on similar or more voter turnout in next four phases of polling,” he said.