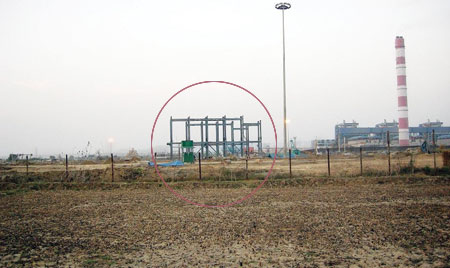 JINDAL Power Limited (JPL), the power bigwig of the private arena in India, is making news.

In the spotlight is the 2,400 MW expansion of the company’s existing 1,000 MW coal-based thermal power facility at Tamnar village in Raigarh district of Chhattisgarh.

The Rs 13,410-crore project hit a roadblock on June 18 when the Union Ministry of Environment and Forests (MoEF) retracted the terms of reference (TOR) granted for the expansion. The environmental impact assessment (EIA) is done based on these TORs. The retraction came in the wake of a complaint from an NGO alleging illegal construction; illegal because the company did not obtain the requisite environmental clearance (see: Attention, environment minister).

Amid the characteristic red and white chimneys, cooling towers and the blue-and-white plant facility, there is a corner that does not quite fit in. Here the plant boundary is covered with black plastic sheets. No one is allowed near this area. This is where the alleged illegal construction of the proposed expansion took place.

On receiving the complaint, the ministry constituted an inspection team comprising officials from its regional office in Bhopal, Chhattisgarh Environment Conservation Board (CECB) and an ex-officer of Central Pollution Control Board (CPCB). The team visited the site on May 22 and found rampant construction for the proposed facility within the premises of the existing one. This is in violation of Section 2 of the EIA Notification, 2006.

Earlier, on February 22, the regional officer of CECB in Raigarh, A C Malloo, inspected the site and issued a notice to the company. “I asked them to stop all construction activity immediately,” he said. Bharat Rohra, senior vice-president, design and engineering at JPL, justified the construction: “We were only doing basic preparations. It took the ministry 18 months to organise a public hearing; we were losing time. We need to finish this phase of expansion by the 11th plan.” The ministry files, however, indicate that the company has changed plans for expansion time and again leading to the delay.

Estimations, re-estimations JPL applied for the expansion phase of the plant in April 2007, while the 1,000 MW plant was still under construction. The expansion was to be of 1,320 MW, adjacent to the 1,000 MW one. The land requirement was summed up as 750 hectares (ha), including 350 ha for the power plant, 300 ha for a dyke to store flyash and water reservoir, and 100 ha for the residential quarters. The TORs for this were granted in July 2007.

In August 2008, the company proposed another expansion of 1,600 MW in addition to the 1,320 MW, bringing the total expansion to 2,920 MW. The land estimation remained the same— 350 ha for the plant. The proposal was granted TORs in December 2008. The company revised the proposal once again in early 2009 and fixed the new expansion capacity at 2,400 MW.

This time it estimated the land requirement to be 1,041 ha—491 ha for the ash dyke, 100 ha each for water reservoir and residential colony and 350 ha for the plant. Jindal Power received the TORs on March 31, 2009. The EIA was prepared based on this proposal. The state government set April 5, 2010 as the date for the public hearing that follows an EIA and is mandatory for an environmental clearance. But JPL had begun construction on the expansion way ahead of the processes that precede environmental clearance.

Coal-rich plant site A major part of the area where the expansion is proposed is in the coalbearing Gare-Pelma Block I and belongs to Chhattisgarh Mineral Development Corporation (CMDC). The Union Ministry of Coal had granted the area to CMDC in 2006 for prospecting purposes. JPL went ahead with the proposal and construction of the new plant without waiting for a no-objection certificate (NOC) from CMDC. This is another violation.

In a letter to CECB, the mineral corporation confirmed the land belongs to it and that no project activity should be allowed there. The letter also mentioned that CMDC has already rejected JPL’s plea for the NOC.

Raigarh collector Ashok K Agrawal then issued an order: JPL was to submit an NOC from the mines department. Only then the public hearing could take place. S K Behar, state mining secretary, said Jindal Power should not have planned the plant in the coal-rich area. JPL in the meantime made changes to the area estimations for the expansion. The revised layout did not require any of the coal-rich CMDC land. With the obstacles tactfully removed, the public hearing was conducted on May 8, 2010.

Considered one of the longest, it lasted 12 hours. According to Ramesh Agrawal of non-profit Jan Chetna, at the hearing there were three or four people who were in favour of the project. “People who were in support of our project were not allowed to talk. They were threatened when they tried to enter the premises,” said P P Singh, executive director in charge of the expansion. Jayant Bohidar, independent activist, dismissed the allegation, “No one was stopped from presenting their view. The company-bought supporters could not come out in the open because there was strong opposition from people.”

The new layout was not acceptable to the Union ministry as it detected a location change in the revised version. It has asked for a fresh proposal, which would imply new TORs and a fresh EIA. “There is no change in plant location; the company only optimised land use as per the TORs,” Rohra said.

According to another new layout, JPL is proposing the 2,400 MW plant over 115 ha, as opposed to 350 ha in the 2009 proposal. About 62 ha of this land have already been acquired and the acquisition of the rest is under process. Ash dykes now require 241 ha instead of 491 ha proposed in 2009. Water reservoir and colony of the existing facility will now have to provide for the existing as well as the expanded capacity. “Since land is a problem in the region we thought of bringing down the land requirement,” Rohra said. “Instead of appreciation, we have only got rebuke from the ministry,” he added.

MoEF has directed the state government to take legal action against the company. “We are in the process of constituting a committee to have a round of inspection before taking further action,” said the state environment minister, Rajesh Munat. Rohra said, if taken to court, JPL will try and convince the ministry that there has been no change in location. 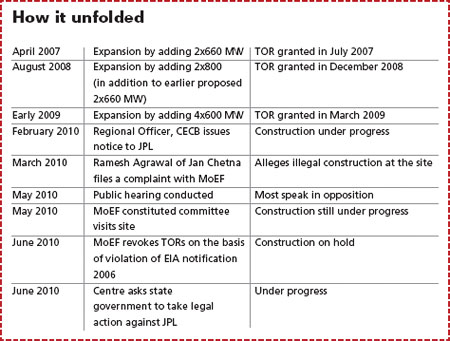