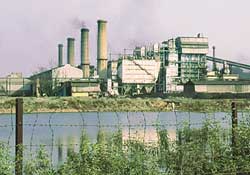 the list of Indian companies inappropriately claiming benefits of clean development mechanism (cdm) seems to be endless, the latest addition being the Raigarh-based Jindal Steel and Power Limited (jspl).

The company is claiming cdm benefits for an activity that it would have undertaken with or without the cdm benefits. This means the company is contravening the 'additional criterion' of cdm, as per which cdm benefits can be claimed only for activities that are not possible without cdm funds. If cleared, the jspl project would be another cdm project that would not lead to sustainable development.

As per the project design document, the company is expanding its existing steel plant and setting up a non-recovery coke oven with production capacity of 0.8 million tonnes per annum. The waste gas emitted by the oven is at high temperature...and possesses significant amount of sensible heat. The purpose of the cdm project is to recover the heat of the gas -- which otherwise would have been released in the atmosphere -- and generate power for in-house consumption and export the surplus to the grid.

Experts disagree with the claims and say the company (in its business as usual scenario) would face losses if it does not recover the heat; the gas accounts for at least 25 per cent coal being used. In fact, any company would already be using the heat for power generation with or without cdm benefits if it has to make its venture financially viable. Moreover, as per law, gas with a temperature of 1,100 c cannot be released into the atmosphere.

According to Sandeep Lele of bvqi, the validator of the cdm project, they cleared the project as it met the technical barrier criteria. "There were certain barriers to implementing the technology, like it needed to be imported from China. In the document, the company also mentions seven other companies that have such coke ovens but they are not making use of the gas," says Lele.

But this may not be true. According to a paper from Peter F X D'Lima, Gokuldas P Kamat and Srirangam R Ramakrishnan of the Sesa Kembla Coke Company Limited (one of the seven companies cited by jspl in its document ): "Eighty four ovens were constructed two years back and they have been producing to their rated capacity of 280,000 tonnes per annum. Both the coke yield and energy recovery are high for a given coal blend." This implies the company is recovering the heat and using it for power production; but Sesa officials are tightlipped about this. It is learnt that even Sesa has applied for cdm benefits.

One of the prime reasons for which jspl has been able to claim the benefits is that currently no national policy is existent in India that promotes waste heat recovery in the coke oven or other industries, even though the Parliament passed the energy conservation act in 2001. On the face of these facts, it is high time that the Indian government should take stock of the situation.