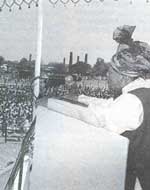 COME state elections -- to be held on February 20 and 25 -- in Gujarat and all political parties promise unstinted support to the Sardar Sarovar Project (SSP). This despite the fact that the ambitious scheme continues to sink into controversy over rehabilitation and technical issues.

Even Prime Minister P V Narasimha Rao, during his recent tour of the state to plug for the Congress, iterated at Sabarmati, Mehsana and Himmatnagar that the party "would never allow any diminution of Gujarat's share of the benefits of the dam." Another senior Congress leader admitted, "We are clear that the forthrightness of our stand is the key to our fortunes in the crucial Saurashtra and Kutch regions."

Politicians appear to have overlooked yet another instance of the technical snags that continue to dog the SSP. In the 2nd week of February, anti-dam activists of the Narmada Bachao Andolan (NBA) released a confidential SSP internal report, which points out that the damage caused to the dam construction by heavy floods last year was more serious than publicly revealed.

On the night of September 6 last year, flood waters tore away an estimated 65,000 cubic metres of concrete from the dam's stilling basin, a slanted surface being built on the riverbed, extending from the spillway upto 291 m downstream. The report reveals that the Dam Safety Panel (DSP) of the SSP stresses that quick restoration is "absolutely essential" to protect further damage to the "toe" of the dam.

The DSP, appointed by the Union government during the dam design stage as per international norms, warns in its report, "It is possible that these repairs may get damaged again during the ensuing flood season. Yet it is essential to undertake them at least to a limited extent to possibly safeguard against any unmanageable and dangerous situations."

The DSP points out that the main reason for the damage was the inability of the authorities to keep the construction on schedule. The report says that "blocks no. 30 and 31 could not be raised to a uniform level of 80.3 m as planned because of rehabilitation and resettlement problems on the upstream and were required to be kept at 69 m." (The government clearance for the dam was on the condition that aspects of rehabilitation as well as environment would be taken care of in tune with the progress of construction).

Says SSP chief engineer D J Baxi, "Construction could not proceed as per engineering considerations, but was influenced by other factors." He explains that because of damage to the stilling basin, there was no barrier to the flood waters.

The other shortcomings the DSP report has noted: after the closure of construction diversion sluice gates last year, there were "heavy post-closure leakages" through the gates. This left little time to finish the concreting work in the stilling basin, and the existing construction was left naked before the flood's fury.

NBA spokespersons claim that, being an officially constituted body, the DSP has been soft on the dam authorities. The DSP has termed the September 1994 floods "unprecedented" (with a discharge intensity of 230-cubic metre seconds/metre). But the NBA's Himanshu Thakkar says, "The dam spillway design is supposed to take care of discharges of upto 250 cumecs/m, according to SSNL (Sardar Sarovar Nigam Ltd) documents and the World Bank staff appraisal report. If a flood of lower intensity has damaged it, then it's clear that the dam is vulnerable to similar floods in future."

In its campaigns to create public awareness over the SSP, the NBA has been urging Gujarat's electorate to heed the dam's frailty. But the political parties are ignoring such criticism. Indeed, soon after the prime minister returned to Delhi, local level Bharatiya Janata Party leaders had begun to promise that their party would work towards reducing the project's construction period by 10 per cent.