J&K to get Rs 60,000 crore as BJP-PDP agree on government formation 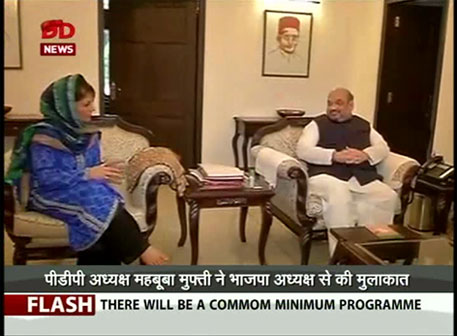 The deadlock over the government formation in Jammu and Kashmir (J&K) ended on Tuesday with the People’s Democratic Party (PDP) and the Bharatiya Janata Party (BJP) agreeing to an “agenda of alliance’’. The elections to the state were held two months ago, but no government could be formed because of fractured mandate and pending negotiations on a common minimum programme between BJP and PDP.

While the government is yet to be sworn in, J&K has been granted about Rs 60,000 crore in the five-year period ending in March 2020. Among the 11 revenue deficit states, J&K will get the maximum grant.

The recommendations of the 14th Finance Commission in this regard have been accepted “in principle” by the government.

The 14th Finance Commission recommended a post-devolution revenue deficit grants, totalling Rs 1.95 lakh crore, for 11 states; among these J&K will get the highest amount.
Finance minister Arun Jaitley has accepted the recommendations of the commission in this regard.

The other states that will get grants are Assam, Kerala, Manipur, Meghalya, Mizoram and Tripura.

The 14th Finance Commission has changed the approach adopted by the previous finance commissions by taking into consideration states’ entire revenue expenditure needs without making a distinction between plan and non-plan expenditure.

Prime Minister Narendra Modi, in a letter to the all the chief ministers, said, “We have wholeheartedly accepted the recommendations of the 14th Finance Commission, although it puts a tremendous strain on the Centre’s finances.”

The prime minister tweeted, “In my letter to CMs, wrote about the Centre accepting recommendations of 14th Finance Commission, which will strengthen our federal spirit. Never before has there been a 10 per cent increase in devolution of divisible pool of resources to the states. This is unprecedented & historic.”