In the last week of May, passersby at Dublin’s busy Merrion road were struck at the sight of a hoarding bearing a message from one Jobless Paddy: “Save me from emigration.” 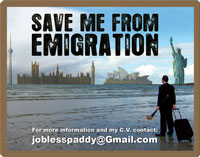 The message struck an instant chord among the Irish, tens of thousands of whom are forced to migrate in search of jobs. Within a week of branding himself as Jobless Paddy, Mac An Iomaire, the creator of the billboard, was appearing at job interviews.

“The billboard is a work of genius. There’s an army of out-of-work Paddies,” said accountant David Daly, 39, a motorist who stopped to photograph the ad. An Iomaire acknowledges his pitch was calculated, in part, to appeal to Ireland’s hurt pride as a nation. “I also wanted to drive interest through the power of social media, so I set up Twitter and Facebook pages,” An Iomaire said.