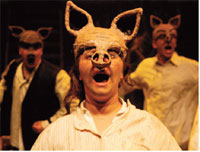 We are exhausted from human oppression,” shouts Old Major, a senior pig revolutionary; “Intifadah,” scream animals. Freedom Theatre, in the Jenin refugee camp in the West Bank is running an adaptation of George Orwell’s Animal Farm with a decidedly Palestinian twist; a cast of animals eventually overthrow their human oppressor Jones, only to turn on one another. According to director Nabil Al-Raee, the play is about the social restrictions in Palestinian society and the corruption in Palestinian leadership. Busloads of Palestinians, from students to politicians, come every evening to watch the play. “We are deliberately being controversial,” Juliano Mer Khamis, the director of the theatre told the news agency IPS. The theatre was attacked in the last week of March by what Khamis called religious fundamentalists. “Our society lacks free thinking,” said Khamis. The son of a Jewish Israeli mother and a Christian Palestinian father, he is claimed by both Israelis and Palestinians.