Journalist assaulted by goons in Chhattisgarh 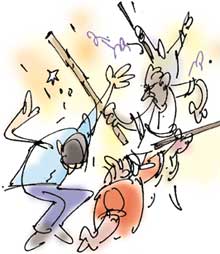 Afzal Khan, a Bhopalpatnam-based correspondent with the Chhattisgarh daily HindSat, was assaulted by Salwa Judum--Chhattisgrah's anti-Naxal militia. He was suspected of having helped local village heads make a request to the Raman Singh government to prevent the state-backed, anti-Naxal militia from entering their villages.

According to Khan, on the evening of November 15, Salwa Judum cadres rounded up local reporters at Bhopalpatnam, in western Dantewada district, and accused them of helping the village leaders, who had visited Raipur a few days earlier. They were let go after being warned "not to repeat same acts again". But Khan was called back later, grilled again and then beaten up with sticks by the goons who were convinced he had been writing anti-Salwa Judum reports. He sustained several injuries including a broken thumb. The journalist is now hiding at an undisclosed location in Jagdalpur, Bastar district, and says he fears for his life and the safety of his family. He told Down To Earth that he didn't file a report with the local police station because "they are all with Salwa Judum." (In fact, Khan says local police had refused to file fir s of three village leaders who were also beaten up by Judum members).

Khan instead filed a complaint with the Inspector-General (ig) of police who has asked the area's superintendent of police, R L Dangi to look into the matter. When contacted, Dangi first told dte "no such incident had taken place". But when reminded of the ig 's instructions, promptly recalled that he'd received a message from his superior and had asked the Bhopalpatnam station house officer to conduct an investigation. Khan's story has so far made it to only one Chhattisgarh daily: Channel India.