A new science and technology info system bails out mediapeople 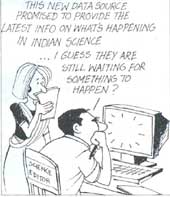 Narendra K Sehgal, director, vp, says that when the organisation conducted several surveys and brainstorming sessions with communicators and mediapersons, it found a giant information gap on scientific advances and technological developments in India. "The vp has prepared a directory of science communicators, and has started a ready-to-print s&t page for small and medium newspapers," he adds.

With the help of their surveys and discussions, the vp has found that final frontier areas like space, atomic energy and labyrinthine environment are of tremendous interest to laypersons and the media alike, and that both have restricted access to such information.

Says V Krishnamurthy of the computer consultancy firm, Software Corner, "The project will cater to the needs of science communicators or anyone who deals with complex technological themes, who would need up-to-date statistics or background information."

vipris will be equipped with the latest information technologies and online databases of various r&d institutions accessible through computerised data retrieval systems and cd-roms. Hypertext and multimedia concepts will also be included, adds Krishnamurthy.

Says Sehgal, "When fully operational, the system will require an annual budget of Rs 80 lakh. Initially, however, the first module of the system will be launched with an allocation of about Rs 15 lakh." vipris will first focus on space, with other areas following in quick succession. It is exploring ways of linking up and utilising the expertise of the National Informatics Centre, Delhi, for data transmission and retrieval.

Says Sehgal, the greatest constraint faced so far by the vp in establishing the system is quality humanpower, skilled in both info design and systems operation.