Elephants used to be aquatic mammals 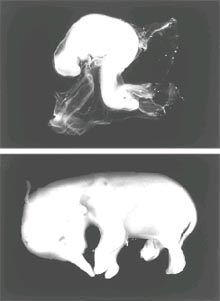 a recent study emphatically suggests that the elephant evolved from an aquatic mammal. A 28-year-old Ph D student, Ann Gaeth, from the University of Melbourne, Victoria, Australia, obtained rare African elephant foetuses and embryos and, while examining them in a laboratory, came to this conclusion.

In 1993 and 1995, adult female elephants in Kruger National Park in South Africa were killed as part of a culling operation to reduce their numbers. The foetuses were then collected and preserved in formalin, photographed, measured and later sent to Gaeth upon her request.

The embryos and foetuses ranged in weight from 0.04 grammes (gm) to 18.5 gm and the estimated gestation or pregnancy period was 58 to 166 days. The presence of a 'Y'-shaped urethral opening, characteristic of an adult male elephant, was checked to determine the sex of the foetus.

There are two features that make the elephant unique. Firstly, it has the longest gestation period - 22 months among mammals. And, secondly, the presence of nephrostomes in the kidney of a foetus, a feature not seen in any other mammalian species.

Nephrostome is a funnel-shaped duct opening on the surface of the kidneys to the abdominal cavity. It enables an osmotic exchange to occur between the abdominal fluid and blood supply to the kidneys. Nephrostomes are a characteristic feature of the kidneys of freshwater vertebrates such as fish, whales, dolphins and frogs. When such vertebrates moved onto dry land, they preserved the aquatic environment of the embryo by encasing it in a fluid-filled amniotic sac. Functional nephrostomes are still present in the first stages of kidney development in egg-laying reptiles and birds.

Nephrostomes are extensively developed in the platypus (a small Australian egg-laying mammal). The echidna (which appears similar to a hedgehog) also has them. However, nephrostomes never develop in the kidneys of present-day mammals.

In the foetuses she examined, Gaeth along with her colleagues R V Short and M B Renfree found the:

l presence of nephrostomes in the kidneys of foetuses at all stages of development;

l intra-abdominal location of the testes; and

l development of the trunk.

These three findings, says Gaeth, suggests that the elephant's ancestors were aquatic. "Now there is a wealth of information to show that elephants and sea cows or sirenia must have once shared a common ancestor," she says. To prove her point, Gaeth says that the moeritherium, which is a primitive class of elephant, has skeletal features highly suggestive of a semi-aquatic lifestyle. There are similarities in dentition (arrangement of the teeth) between the herbivorous elephant and the sea cow. Further, Gaeth found that a bone in the middle ear of the sea cow was also present in the elephant foetus. Most recently, molecular studies using the gene tree have reinforced the affinity between the elephant and the sea cow.

Regarding testicular evidence, Gaeth says since time immemorial elephant foetuses followed the normal mammalian pattern except that the testes remained intra-abdominal, never descending into the scrotum. At no stage of foetal development were there any characteristics that belonged to scrotal mammals.

In scrotal mammals, the spermatic artery is surrounded by complex blood vessels draining the testis but, in the adult elephant, the structure is notably absent. Instead, the testicular artery ran its direct course from the renal artery to the testes. If they were 'secondary testiconda', whose foetuses had once been scrotal, the complex blood vessels would have been retained as in the case of seals and whales.

Seals and whales are classified as 'secondary testiconda' because when they entered the water, they presumably had scrotal testes, which were subsequently withdrawn in the abdominal cavity to prevent them from getting too cold. Even a brief period of extreme testicular cooling can render an animal permanently sterile, says Gaeth.

The researchers agree that the elephant like the dugong (sea cow) is a testicond mammal - one that has intra-abdominal testes.

The researchers also found evidence of the trunk developing in the foetuses at an early stage. It coincides with the first appearance of the nephrostomes. The trunk might have evolved as an adaptation to an aquatic environment. "It would have been used as a snorkel and it is to this day when elephants swim in deep water," says Gaeth.