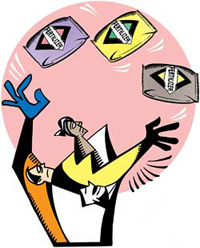 a shortage of fertilizers ahead of the kharif sowing season triggered protest in Haveri district of Karnataka on June 10 this year. A farmer, Siddalingappa Churi, was shot down by the police and 12 others were injured. The protests spread to Hubli, Dharwad, Davengere and Chamrajnagar districts; stone pelting, buses burnt. Two cultivators from Davengere committed suicide. The early onset of the monsoon put farmers in a spot and they did not get the amount of fertilizer they sought. Farmers in Kerala too are reportedly facing similar shortage.

Experts say that during the peak sowing season there is a high demand, but once the demand comes down the problem of shortage can be dealt with. But for farmers, this is hardly an assurance. "In the monsoon farmers require seeds and fertilizers for a variety of crops including maize, groundnuts, pulses and cotton. This time monsoon came early in Karnataka.The agriculture department should have made arrangements to provide the farmers with fertilizers. Even the central government did not prepare for the demand of the farmers in the sowing season,'' said K S Puttanniah, president of the Karnataka Rajya Raita Sangha.


The issue is being used to take the newly formed bjp government to task. The Congress has launched an agitation in Haveri against the police firing, demanding supply of fertilizer and seeds. Mallikarjun Kharge, leader of the opposition in the legislative assembly, has held the BJP responsible for the suicides in the current session of the legislature. "There has been an escalation of the price of raw material used in fertilizers. All this is imported. The central government gives subsidy to fertilizers and the cost of production was Rs 17,000 per tonne. Due to the cost of raw material going up, the cost of production has gone upto Rs 50,000 per tonne. So the centre is no longer ready to give subsidy. There are fertilizer manufacturers who have stopped production and that is why there is a scarcity," said Basavaraj Bommai, state irrigation minister. He added that it was the duty of the centre to distribute fertilizer.

The government however claims that there is no shortage and that stock was supplied in ample quantity to the states. Urea, especially, has been made available more than the assessed requirement. But the sales have been remarkably low. "There has been ample production. The problem lies with the logistics in different states. Hoarding and lack of proper transportation is something all the states need to look into," explained Satish Chander, director general, Fertilizer Association of India (fai).

The parliamentary standing committee on fertilizers, headed by Anant G. Geete of the Shiv Sena, also met in the capital on June 12 to discuss the shortage. "The committee was in agreement that Karnataka was facing a crisis. We believe the centre should consult state governments in matters regarding the distribution of fertilizers," said a committee member, who did not wish to be identified.

R C Gupta, deputy director general, fai added that while there was no shortage of urea, a source of nitrogen, and none either of muriate of phosphate (mop), a source of potassium, there was concern on the shortage of phosphatic fertilizer di-ammonium phosphate (dap). He added "The raw material for these fertilizers is imported and prices in the international market dictate its cost. Their availability is scarce. The price of crude oil will also dictate fertilizer price."

The centre has also decided to release 1.4 lakh tonnes of dap for Karnataka this month, 20,000 tonnes more than the state's estimated requirement. The decision comes in the backdrop of the Karnataka Chief Minister B S Yeddyurappa's meeting with Prime Minister Manmohan Singh and fertilizer minister Ramvilas Paswan in New Delhi on June 11.

The cabinet committee on economic affairs gave its nod to the much awaited policy of nutrient-based pricing of fertilizer as well as a uniform freight policy. The latter will help incentivize distribution of various fertilizers to remote areas of the country. Both policies will take effect retrospectively, from April 1, 2008. While the move to nutrient-based pricing will lead to significant reduction in the prices of many fertilizers, experts agree the government's subsidy bill is likely to increase as a result. 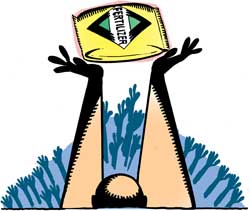 A Group of Ministers (gom), instituted to look into fertilizer sector reforms, had recommended a nutrient-based pricing regime and estimated an increase of at least Rs1,200 crore in the subsidy burden for 2007-08 if this regime was implemented. The actual impact will depend on the rate at which the nutrients are subsidised. The gom panel was headed by agriculture minister Sharad Pawar and included finance minister P. Chidambaram, fertilizer and chemicals minister Ramvilas Paswan and deputy chairman of planning commission Montek Singh Ahluwalia. "Nutrient based pricing essentially implies the price of a nutrient, say phosphorus or nitrogen, should be same in all the fertilizer products. It's a positive move that will not only increase agricultural productivity, but also restore soil health," said Chander.

At present, the government follows a product subsidy regime, wherein the farmer has very little choice of fertilizer and opts for those subsidized. This has led to comparatively higher usage of straight fertilizers (like urea, dap, mop and ssp, or single super phosphate) vis-a-vis complex fertilizers, which are agronomically better products.Nutrient-based pricing will lead to parity in the prices of complex and straight fertilizers and, thus, is expected to promote balanced use by encouraging complex fertilizers.The government hopes a farmer will no longer make excessive use of urea since he will get nitrogen at the same price in other fertilizer products, too. "A wide variety of fertilizers customized to a farmer's specific needs will be available. Earlier he used only urea since other complex fertilizers were costly while urea came cheap," said Chander.

The nutrient-based subsidy would help reduce the maximum retail price of complex fertilizers. Companies would now have the incentive to produce different varieties of fertilizers, since the subsidy would no longer be product-based. Chander agrees that while the subsidy may increase in the short term, over a longer term nutrient-based pricing will bring down the subsidy burden. Primarily because lower fertilizer use would be required for the same level of productivity. Subsidy payments have skyrocketed in the past four years from Rs 15,779 crore in 2004-05 to an estimated Rs 95,000 crore in 2008-09, or 1.9% of the gross domestic product. Last year, the subsidy stood at Rs 40,338 crore, which includes Rs 7,500 crore paid through the first-ever issue of fertilizer bonds. In 2007-08, the total domestic fertilizer production stood at 32.6 million tonnes while India imported 14.5 mt.