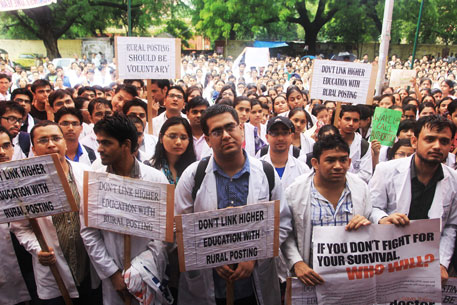 Junior doctors of government medical colleges and hospitals organised a protest at Jantar Mantar on Thursday against the Centre's decision to make rural posting mandatory. They termed the move as UPA’s political decision keeping in mind the forthcoming parliamentary election. The doctors termed the agitation as ‘Save the Doctor’.

The decision to make one year rural posting mandatory for medical students before they take admission in post-graduate courses was taken last month. The decision by the Union health ministry followed two years of deliberations. A ministry official said the decision could be made applicable from 2014-15 student batches.
Hundreds of medical students with the support of Indian Medical Association (IMA) and Delhi Medical Association (DMA) gathered at Jantar Mantar to oppose the government decision. They claimed that they are not against rural posting but that it should not be made mandatory. They want rural posting to be made voluntary.

They claimed that there is no infrastructure in rural areas. There are many primary health centres (PHC) which exist only on paper. There is no water facility, no school for children, they said, while adding that security is major concern in rural areas. In such a situation, how will doctors serve there? they asked.

Deepankar, general secretary of Vardhman Mahavir Medical College and Safdarjung hospital, said that it was not possible for medicos to serve when infrastructure is so poor and health centres are either dilapidated structures or non-existent. “We should be sent to rural areas during internship, not after the course,” he said, arguing that one year mandatory service will extend already long courses of medical studies.

State secretary of DMA, K K Kohali, too, backed voluntary posting for medical graduates. When he was asked how he can advocate voluntary posting as record says that doctors are not willing to go in rural areas, he said they will go when the government gives them lucrative incentives. Instead of forcing students to go to rural areas, the government should advertise vacancies and recruit doctors. There are hardly 2,000 PHCs with no doctors; how will the government accommodate all PG aspirants? he asked.

Cardiologist and dean of board of medical education in Moolachand Medicity, K K Aggarwal, also reached the venue to express solidarity with the protesters. He pointed out that almost 100,000 students are waiting to take admission in PG courses. “How will government accommodate all of them, if rural posting becomes mandatory?” he questioned. He said that the government should find some other way out to send doctors to rural areas instead of making it conditional for admission to PG courses.

K M Shyamprasad, who was a member of the task force on medical education of the Government of India's National Rural Health Mission (NRHM) and a member of the governing body and institute body of the All India Institute of Medical Sciences, New Delhi, said the protests against rural posting is wrong. He said that these same doctors oppose the government decision to launch three year MBBS course. “They are also opposing compulsory rural posting.

In these circumstances, who would provide care to the rural areas?” he asked. “If the doctors have problems with infrastructure in rural areas, they must demand that it is improved but they should not associate it with the posting,” he said. About the long duration of the course, he said that if anybody has problem with the duration, he must not opt for it. There are many other professions which require less duration of study.