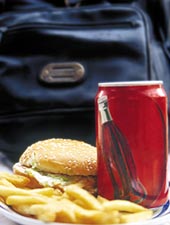 Delhi kids better lay off junk food and colas. A recent study by the All India Institute of Medical Sciences (aiims) reveals startling details about school students' health. It has found 23.1 per cent boys to be overweight, while 8.3 per cent fall into the obese category. The corresponding figures for girls are 27.7 per cent and 5.5 per cent. More than 1,000 adolescents were covered in the survey.

The fat epidemic has mainly been attributed to junk food. The study found that more than 62 per cent of the respondents ate snacks between meals. As many as 94.2 per cent of them consumed fast food - 18 per cent gorging on it three to seven times a week.

Curiously, even as the initial reaction of the Delhi government's directorate of education was to ban the sale of fast food and aerated drinks in school canteens, it backtracked later and said it would withdraw the order.Director, Education (de), Rajender Kumar indicated that he had not been consulted on the issue. It transpired that a junior officer had jumped the gun and passed the order "accidentally".