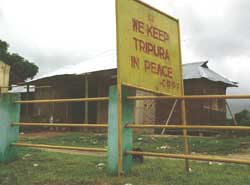 the Supreme Court (sc) recently issued a show-cause notice to Tripura chief secretary R K Mathur for alleged violation of an apex court order on the relocation of tribals from militant-infiltrated areas in the hills to clusters along highways or other arterial roads. The court has asked Mathur to respond within three weeks.

M A Khan, retired principal chief conservator of forests, brought the violation by the Tripura Tribal Welfare department, which looks after the rehabilitation of tribals, to the court's notice.

A public interest petition was filed in the sc against the rehabilitation plan in 2004 by Delhi-based ngo Lover of Forests, in response to which the apex court stayed the project's implementation because it involved the diversion of forest land for non-forest use the state's welfare department restarted shifting tribals since January 2005 claiming that clearance was still pending in the sc.

In February 2004, the Tripura government had launched a village-regrouping programme in north Tripura and the Dhalai district, where most of the tribal population lives as part of the relocation plan, say official sources. Authorities claimed it was done to contain militancy in the region and that the clusters would become development zones for marginalised tribals. The state has already relocated around 400 militancy-affected tribal families along the Assam-Agartala National Highway and some other major roads.

The land around these highways is forest category, being diverted for non-forest purposes. Under the Forest Conservation Act, 1980, it should be cleared by the Union ministry of environment and forests (moef). moef granted permission to the project in 2003 but also directed the state government to adhere to environmental directives like adopting the compensatory forest policy. The policy says that when a piece of forest land is used for non-forest purposes, twice the amount is to be brought under forest cover. moef sanctioned the project 462 hectares (ha) of forest land to resettle tribal villagers.

Tribal leaders, including state legislators accuse the state government of using the programme to forcibly move tribals from their lands, on which they have been staying for decades, to ghettos near armed forces camps along the highways. Environmentalists have also been opposing the move right from its initial phase. They claim the compensatory forest policy was not being followed.

Those who support the project say it will help check militancy in the state. Some relocated tribals also seem positive. "At least we get basic amenities and the attention of the administration here," says Manaranjan Tripura, who was relocated along National Highway 44 in Dhalai district. Rajlaxmi Debbarma echoes this view, saying that as long as they were in remote areas, they were at the mercy of both militants and paramilitary forces, and after relocation, they were more secure.

State forest minister Jitendra Chowdhury disagrees with the environmentalists. He says the state government had adopted the compensatory forest policy despite the population pressure in the state. He adds that this had actually led to an increase in forest cover in Tripura, citing a recent Forest Survey of India report.

"We are serious about environmental issues but the situation of Tripura is very different from the rest of the country. It is difficult to decide what is more important -- forest or human life," Chowdhury says.

Others in government dispute this. The state forest department says it was pressured by the tribal welfare department to convert 10 ha of forest land in west Tripura to resettle tribals.