Just talking renewable energy will not do

Huge difference between potential and utilisation of renewable energy

• The global potential for renewable energy is 20,000 times than that of the daily consumption of atomic and fossil energy. In 2005, non-hydro renewables generated only 2 per cent of world's net generation of 4.06 trillion kilowatt-hour (kwh)

• At present, there are two principle methods employed by governments worldwide to support installation systems: 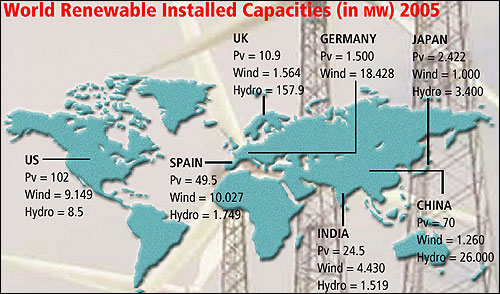 • renewable energy feed in tariff system: It guarantees that all electricity generated from renewable sources will be purchased, besides fixing a long-term price for such purchase. More than 80 per cent of the 1.4 mw of renewables installed around the world in the first half of 2002 were installed in three countries with guaranteed minimum prices: Germany, Denmark and Spain.

• green credit system: It requires utility companies to purchase a proportion of their generation from renewable sources. They do so by purchasing green credits. Credits are traded and the market sets the price. The countries that follow this system are the uk, us and China

• Additionally, tax incentives and funding are often available. In Japan between 1992 and 2000, euro 150 million was invested per year in solar energy, achieving 41 per cent growth and in the uk , 40 per cent of capital costs are covered by the government

• The us has risen from 370 mw installed wind capacity to 2,400 mw due to the Production Tax Credit being extended through to 2007

• China has set a target of 12 per cent of power generation from renewables by 2020, up from 3 per cent in 2003. 70 per cent of components for new wind installations come from Chinese manufacturers in an effort to drive costs down

• Japan intends to quadruple generation from solar energy by 2010 to reach 4,820 mw

• In Denmark, 19 per cent of electricity comes from wind energy

• In Spain, 8 per cent of electricity comes from wind energy