Used to many parliamentary privileges, Bhakta Charan Das, the Lok Sabha member from Kalahandi in Odisha, was baffled when the local forest department didn't allow him to carry away a few pieces of bamboo bought from Jamguda village which has been conferred community rights over its forest. The village comes under his parliamentary constituency and is the first village in the state to exercise rights over bamboo under the Forest Rights Act (FRA) of 2006.

In 2010, the village got community rights over 123.50 ha of local forest under FRA, which defines bamboo as a minor forest produce and gives community the right to manage, harvest and sell bamboo. The village residents have been voluntarily protecting this patch of forest for the past three decades.

But he was not allowed to take the bamboo out of the village without a transit pass from the forest department. “There is no standing order on issuing transit order to the gram sabha; also, we have not received clear instructions on sale of bamboo from community forest to outsiders,” says a forest official from the district. Das has not been issued the transit pass till now. "The Forest department told me the state government treats bamboo as a restricted commodity. How can they bypass an Act (FRA) passed by Parliament?" he asks.

Down To Earth couldn't contact the area's divisional forest officer (DFO) despite repeated efforts. The forest department, however, has allowed the village to harvest and use the bamboo within the village.

“I spoke to the local DFO as well as the chief conservator of forest in charge of non-timber forest produce to process my transit pass. They have to; the law is very clear. It is a symbolic fight for a right given under law,” says Das.

Right over bamboo under FRA has been a contentious issue. Forest departments across the country have been opposing FRA's definition of bamboo as a minor forest produce and are not granting sales right to villages given community rights over local forests. 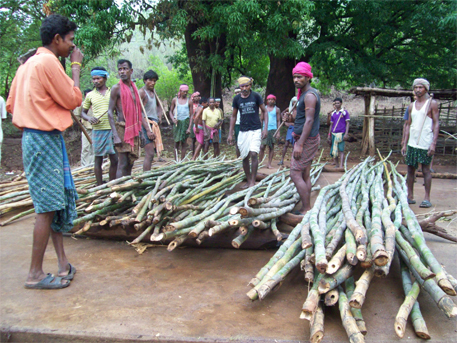 In April 2011, the then environment minister Jairam Ramesh bought bamboo from the village council of Mendha-Lekha village in Maharashtra, the first village in the country to exercise the right under the FRA. It was after a long battle between forest and tribal affairs bureaucracy over the Act's provisions that community's right over forest and bamboo as a minor forest produce was recognised.

“Minor forest produce (MFP) is a ownership right vested by Parliament under Forest Rights Act and all state authorities are obliged to respect this provision,” he had said in response to the forest officials' opposition to this provision. Ramesh also wrote to all states, clearing the doubts over the Act's definition of MFP that includes bamboo and tendu and ordering them to adhere to this law.

Interestingly, Odisha government agreed to deregulate the bamboo trade in sync with the FRA. During a meeting of forest secretaries in Delhi two months ago, the state government agreed to the FRA definition of MFP, sources say. The prime minister's office along with the Planning Commission have been working on a package to deregulate trade in MFPs and to declare minimum support price for a few of them.

In this context, the current controversy indicates confusion between the state tribal affairs department—the nodal ministry for implementing FRA—and the forest department. “As far as we know, there is agreement within government to allow bamboo harvesting and selling in community forests under FRA. The experience of the member of Parliament may further clarify things,” says a senior official of the state's tribal development directorate.

Jamguda has harvested bamboo worth Rs 1,00,000. The latest hurdle created by the forest department will dash the village's hope of using the money from bamboo sale for local development. “Monsoon is already at our door step. If we don't dispose of the bamboo well in time, we may not be able to earn,” says Trinath Patra, secretary of Kalahandi District Forest  Federation, an association of forest protecting communities like that of Jamguda. In the district, 155 villages have been granted community forest rights under the FRA. “Many of them have large bamboo forests and, thus, have huge earning potential for local development. But the new hurdle will keep people hoping,” says Patra.

"This is a fight longer and bigger than the enactment of the Act," says Kalahandi's member of Parliament.