Karnataka hangs on to its sandalwood

The Karnataka government ostensibly allows private production of sandalwood, but actually maintains a tight rein on the trade. In fact, eight months after the notification of amendments in the Karnataka Forest (Amendment) Act 2001, stakeholders are yet to see any tangible evidence of the deregulation that these changes were meant to usher in 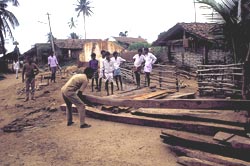 during Tipu Sultan's reign over Mysore in the 18th century, the sandalwood tree was accorded royal status and brought under state control. Today the Karnataka government ostensibly allows private production of sandalwood, but actually maintains a tight rein on the trade. In fact, eight months after the notification of amendments in the Karnataka Forest (Amendment) Act 2001, stakeholders are yet to see any tangible evidence of the deregulation that these changes were meant to usher in.

On its part, the state government has launched an aggressive 'grow more sandalwood' campaign, which was the flavour of the May 11, 'National Technology Day' celebrations in Bangalore. The drive comes in the wake of the sharp fall in sandalwood production. As compared to 1977-1978 when Karnataka produced 3,000 tonnes of sandalwood, the corresponding figure for 2002 plummeted to 20 tonnes. Experts blame the downswing on lopsided laws, indiscriminate smuggling and rampant corruption in the Karnataka forest department (kfd). "Only free trade of sandalwood will ensure abundant stocks and healthy competition," avers Gurdeep Singh Chawla, president, Indian Sandalwood Exporters' Association, Delhi.

Even as the authorities are going overboard with their promotions, sandalwood smuggling continues unabated. Around 500 tonnes of sandalwood is sneaked out of the state annually.

On the question of private ownership, Karnataka's own regulations leave a lot to be desired. Though the amendment, recognises individuals growing sandalwood as absolute owners, it does not dilute the state's control. For instance, to cut trees, the owner needs the range forest officer's permission and has to fill in as many as six forms.

Furthermore, the owner still has to inform the nearest forest division if a tree is stolen. "Earlier, one had to keep track of every tree. Now merely intimating the police will suffice," claims B U Chengappa, additional principal conservator of forests. This slight shift is merely cold comfort to the stakeholders.

Yet another catch is that the grower is allowed to sell trees to only four designated purchasers: kfd, public sector undertakings such as Karnataka Handicrafts, Karnataka Soaps and Detergents Limited (ksdl) and Forest Industries Corporation (fic).

Previously, the kfd paid the owner 75 per cent of the value (fixed at Rs 1.44 lakh per tonne) of wood after deducting dressing, transportation and other costs. But now the price fixed by kfd each year will be based on the average value of sandalwood in auction sales held in Karnataka or Tamil Nadu. The owner will get the net amount, after costs of preparation and supervision have been adjusted, not later than three months from the date of receipt.

"The growers should be able to cut and sell, with the forest department certifying only the first transaction," opines Anantha Padmanabha, former scientist with Bangalore-based Indian Wood Science Institute, which conducts research on various types of wood. "In the long run, the amendment might encourage people to grow sandalwood, but they will find it difficult to protect it," feels Madhav Gadgil, Centre for Ecological Sciences, Indian Institute of Sciences, Bangalore.

If the laws are not simplified further, the world-famous Mysore sandal -- also alluded to as the 'fragrant ambassador of India' -- may soon become history.