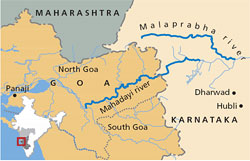 Karnataka’s irrigation department has fast-tracked construction work to divert water from the Mahadayi river to the Malaprabha. The canal project is under dispute but the state’s water resources department is adamant that it is crucial to meet the drinking water needs of the twin towns, Hubli and Dharwad, that aim to be the first in India to supply water round-the-clock to all its citizens.

Goa, that lies downstream, has repeatedly said the Mahadayi (Mandovi in Goa) waters are oversubscribed. The state had approached the Supreme Court in 2006 to stay the construction and to resolve the dispute. On October 18, this year, the Supreme Court directed that a tribunal be set up in three weeks to adjudicate the inter-state dispute. It is expected to start functioning by mid-November.

Karnataka began the work on diversion in 2002. It planned two dams, one each on the Kalasa and the Banduri tributaries of the Mahadayi, to store water to be diverted via canals to the Malaprabha. Work came to a halt the same year. The then bjp-led alliance at the Centre yielded to the demand of the bjp-led government in Goa and suspended the project. The two states have been at loggerheads since.

Karnataka’s water resources department has realigned one diversion canal that was planned through forestland and needed clearance from the Union environment ministry. The new route is through private land. “Fifty per cent of the work for the 5 km Kalasa diversion is complete and the rest should be completed by March next year,” said a senior irrigation department official. The other diversion canal is facing land acquisition problems; the water resources department is conducting surveys to see if it can be realigned. Work on the barrages have not started.

The Mahadayi originates in the Western Ghats and flows 35 km in Karnataka and 52 km in Goa. The downstream state constitutes a large part of the river’s catchment (78 per cent), which also includes runoff from Maharashtra, although the main stem of the river does not flow through that state. Maharashtra, as a result, is also party to the water-sharing dispute (see map).

Goa claims the transfer of water violates the National Water Policy, which does not allow transfer of water from a deficient basin. A 1989 estimate by the National Water Development Agency, set up to conduct water balance studies. shows the annual usable yield of the Mahadayi is 1,517 million cubic metre (mcm). Goa has made a similar estimate (see ‘Water yield estimates’). In their correspondence with the Union water resources ministry, Goa said its annual demand for water in 2050 would be 2,674 mcm, which is much more than the river’s usable yield.

Karnataka officials said the Mahadayi river is not water deficient and blamed Goa for not fully using its water before it flows into the Arabian sea. But Goa authorities insist that the water needs of Hubli-Dharwad can be met by curtailing irrigation or diverting water from other rivers in Karnataka. The quantum of diversion, 214 mcm, is much more than what the two towns need, said Sandeep Nadkarni, chief engineer with Goa’s water resources department. The water will surely be diverted for other activities, including sugarcane plantations, he said. “We doubt the quantum of work they are doing is for 214 mcm,” he added.

In July 2002, Goa had requested the Centre to constitute a water tribunal. A number of meetings between the two states were arranged with the chairman of the Central Water Commission, the premier technical advisory body on water resources. The states failed to resolve their differences.

The water tribunal will now settle the dispute.