With crops lost to floods and the government continuing to work at a slow pace, several believe that the worst is yet to come 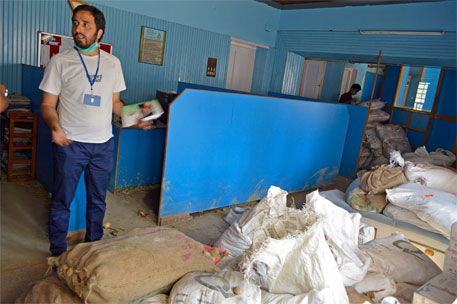 Before the devastating floods hit the Valley in September this year, Kilam-Gund—a village in south Kashmir—was a residential area with about 700 people living in 205 houses. But when the floods approached, water from River Jhelum fiercely cut through the village, changing its shape. Now, a stream of water, full of cobblestones, passes through the debris of houses that have been swept away and through the only road link that existed in that village.

A week’s rain in region led to swelling of the river, thus causing floods. The summer capital, Srinagar, with Lal Chowk as economic hub, was also submerged. The government estimated an economic loss of Rs 100,000 crore. Around 300 people have died and 100,000 structures were left damaged, and tens of thousands turned homeless in a few hours of rising water level. Srinagar-based civil society group, The Kashmir Center for Social and Development Studies (KCSDS), said that the region has lost over US $ 16 billion and at least 3 million houses have been completely or partially damaged. The shopkeepers have constantly been demanding that the government should announce a compensation of Rs 5 lakh each for small shops and Rs 10 lakh each for big shops.

The newly-formed water stream in Kilam-Gund passes in front of 34-year-old Khursheed Ahmad Bhat’s damaged two storey eight-room ancestral house. Bhat, a carpet weaver with two children and wife is, nowadays, busy walking through the debris, searching for anything that may be useful. The floods that damaged his 0.6 hectare paddy land also swept away abound 40 houses in the area. Carpet looms with half-weaved carpets were taken away by water. “One of my carpets was picked up in a nearby village, a mile away,” says Bhat. He adds, “I used to reap around 30 tonnes of rice annually. But now, we will have no crops. Even if we continue working for lifetime, we can’t get everything back."

Like Bhat, several people have lost their businesses and houses in Srinagar too. Despite the rising water level in the city and south Kashmir already reeling under floods, the government didn’t take any major step to save people. It was only after Prime Minister Narendra Modi’s aerial survey that the army and other agencies were put into action. Though the army claims to have rescued 149,000, it is believed that the locals in the Valley rescued majority of those trapped.

Locals become saviours
The locals in the Valley used all means and methods—boats made of plastic and wood, empty water tanks, tubes and more floating objects—to save the affected. While the community operations continued, several Kashmiri volunteer groups established relief camps in the city to provide essential supplies like food, clothes, medicines and drinking water.

A study released by Young Kashmir Volunteers Alliance (YKVL), an amalgam of various such volunteer groups, reveals that 92.3 per cent of the relief shelters received food supplies from community donations and the local volunteers rescued 96 per cent people. “In Srinagar, 26 relief shelters were found housing 37,450 people, including 200 pregnant women. Out of these, only 7.7 per cent received food supplies from non-governmental organisations (NGOs) and a majority of people in these camps reiterated that the army/National Disaster Response Force did not turn up for any help, despite media claims,” the study claims.

Airlines transport aid for free
Many private airlines helped in transporting relief material from other parts of the country to Jammu and Kashmir for free. An Indigo airlines employee stationed at the Srinagar airport says, “Usually, we have nine flights to Srinagar. But, during floods, we arranged for 15 flights and transported tonnes of relief material. In one instance, we also transported 15 cartons of Marlboro cigarettes,” he says, requesting anonymity. “The inflow of passengers has seen drastic decline since the floods hit Kashmir. It will take months for tourism to get back to normal,” the employ adds.

The relief material is being sent to camps based in Srinagar. Several volunteers in the state who have turned up to help in distributing the material are also running the camps on their own. With a network of 216 sub-camps, Zeeshan Pandith is running one such big base camp with the help of volunteers and supplies that are being sent from Kashmiris based outside the Valley.

The camp, based at the International School of Kashmir (ISK) and owned by Pandith, has 118 volunteers. "We are working directly with the mosques as they are accessible to everyone. More importantly, the process remains transparent," says Pandith. The camp is keeping a record of all the supplies received and sent for distribution. Volunteers have not released any data yet as many of them believe that several registered organisations have been misusing the data to promote themselves. "We want to make it public on our own rather than giving it to any NGO from the US, the UK or Delhi."

To keep a watch on how much relief arrives in the Valley, the government has asked the relief camps to get an authorisation letter from the sales tax department while receiving any supplies.

Pandith also believes that the organisations that are familiar with the local culture and operations of government departments in the region would be more efficient and in a better position to deal with the crisis. "We have to ensure that there is no political agenda behind relief distribution," he says.

The worst is yet to come
With winters arriving in a few weeks, aid volunteers believe that the worst is yet to come. Crops have been severely damaged and all the remaining stocks at shops and houses have been lost to floods. If the government continues to work at the current pace, people are likely to get impatient. Their anger has already started reflecting in form of protests and roadblocks.