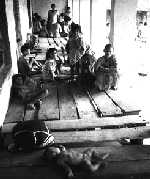 Viral encepha-litis, a mosquito-borne disease, has taken its toll in southwestern parts of Nepal during this year's monsoon. The disease, which broke out in the first week of July, has already claimed 13 lives, eight of the victims being children, according to M Kidwai, chief of the Nepalganj zonal hospital.

Last year, nearly 372 patients suffering from viral encephalitis were admitted to the Bhari zonal hospital in Nepalganj, a small town bordering India, some 500 km west of Kathmandu. Nearly 72 people died as a result of this disease. Viral encephalitis is caused when a mosquito bites carrier pigs or ducks and then injects the virus into human beings.

Villages on the periphery of Nepalganj have been the worst affected every time the disease has struck. Medical experts say children between the age of five and 15, are most susceptible to the virus. Nepalganj hospital sources have been quoted as saying that 90 per cent of those infected are between five and 15 years of age.

The local administration has come under fire for not making concerted efforts to deal with the increasing number of mosquitoes in the region, despite the outbreak of the disease. After the panic in Nepalganj, municipality has started spraying insecticides to prevent encephalitis in the area. But the situation in areas beyond the municipa-lity's jurisdiction has not improved so far.