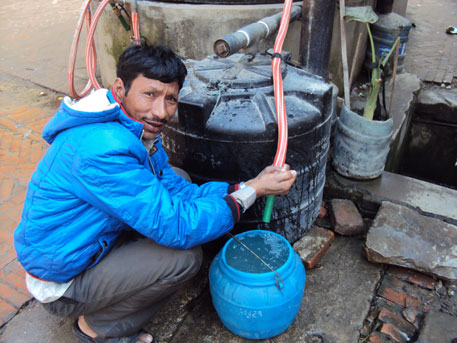 It was hoped that the parched Kathmandu valley's water woes would end this year when the much-debated Melamchi Water Supply Project rolls out.  But the wait for Kathmandu residents just got longer. The project contractors have declared they cannot complete it before 2015. At present the valley, receives only 50 per cent of the required water—100 million litres a day (MLD) against the demand of 203 MLD—from the water utility, Kathmandu Upatkaya Khanepani Ltd (KUKL).

Kathmandu valley depended on traditional water structures like stone spouts (hitis/dhunge dharas), ponds (pokhoris) and wells for their water supply until the middle of the nineteenth century when water supply through pipes started. The valley has over 200 ponds, 400 hitis and countless dugwells, says Prakash Amatya, executive director of the Centre for Integrated Urban Development, a non-profit. The water supply systems date back to the Lichhavi Period, 1,500 years ago. The hitis are fed by man-made channels called Rajkulos. These Rajkulos start from the foothills and feed the stone spouts of urban areas in the valley. Few hitis are also fed by local aquifers. A filter system, which mainly consists of bricks, tiles and sand, is placed behind the hitis. 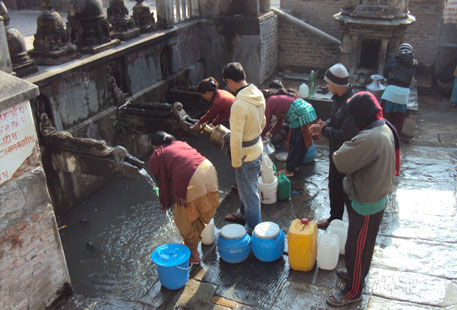 The pokhoris, located in residential neighbourhoods, acted as storage tanks as well as recharge systems in the valley. Sudarshan Raj Tiwari, professor at the Institute of Engineering in Kathmandu who has been working on the water supply systems of the valley, says that the courtyards in many royal buildings were made of porous material to recharge the neighbourhood aquifers.

The indigenous tribes of the valley, the Newars, have a unique method of maintaining their water supply systems. They celebrate Sithi Naka and Machendra Nath festivals which aim at cleaning and maintaining the water supply systems, says Tiwari. Sithi Naka festival falls in June when dugwells and hitis are cleaned. The cleaning of the systems is carried out in an organised manner. The tribes have a traditional method of checking the oxygen level in the wells before entering into these structures. Newars also worship wells, ponds and the water spouts. During Machendra festival, the water supply canals are cleaned and maintained. 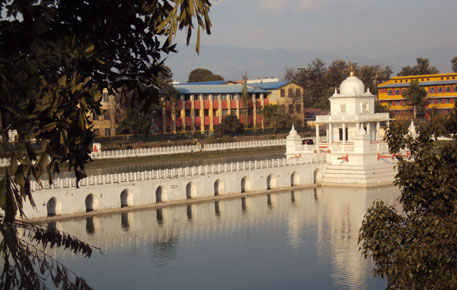 The recharge areas for the hitis have also been encroached upon because the municipality has failed to map them, says Tiwari. Negligence by the government during road construction has destroyed fifth century mud lined canals in the valley which fed the spouts, he adds. Absence of proper sanitation facilities has contaminated the water supply in these structures. Take the case of an area Kumanani. The area does not have access to water supply through pipes and negligence has contaminated the groundwater. The residents are thus forced to depend on tanker supply, in spite of the fact that there are more than two traditional dug wells present in the locality. Machakazi Moharzan, a resident and community leader of the area, rues: “To reduce ammonia content in the groundwater, the government spent over Nepalese rupees (NPR) 7 lakh. But it is the local communities who have to restore the traditional water supply systems.”

Alok hiti in Patan area of Lalitpur district is a unique example where the community has pooled resources to revive traditional stone spouts. They have made new recharge systems to reactivate the local aquifers. The community has also developed a water supply distribution system, sourcing water from the hiti.  Many of these reservoir ponds were filled up due to construction or converted into garbage dumps. “Ikache in Lalitpur had 39 ponds and now it has only about 12,” says Sushil Srestha, president of Alok hiti committee. If initiatives are not taken to revitalise the local aquifers through pond recharge or even contemporary methods of recharging, spouts and wells will be lost, Srestha adds.

“The government should take interest in restoration of the traditional water supply systems and festivals around the maintenance of the systems,” says Tiwari.