Telangana's first chief minister says his state will be made the seed bowl of the country; promises single window clearance system for industries; no mention of environment protection 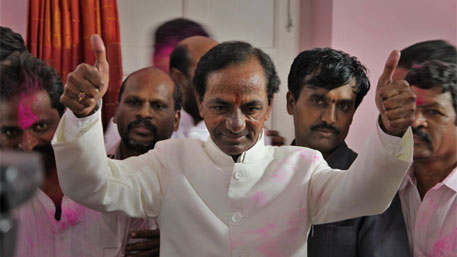 In his maiden speech as the first chief minister of Telangana, K Chandrasekhar Rao has promised a government that would be friendly to the farmers, industry and employees. Giving a broad picture of what his government intends to do, he said all development programmes in the state would be people-centric. He has promised to make Telangana the seed bowl of India and provide a single window clearance system for the industry.

He was addressing people on Monday at the Parade Grounds in Hyderabad soon after his swearing-in. He said the welfare and development of people would be the topmost priority of the government. "People have high expectations from the state government. We will make all efforts to make their hopes and aspirations come true. Development of Telangana will be people-centric, transparent and corruption free," he said. The chief minister said his government would take suggestions and advice from people for making the government move in the right direction. For this, people's committees would be set up, he said.

Rao reiterated his party's election promise that the state government would give priority to agriculture sector. He has promised to create irrigation facilities for 100,000 acres (one acre equals 0.4 ha) in each of the 72 of the 119 Assembly constituencies that do not have irrigation facilities. "Our focus will be promoting minor irrigation by reviving thousands of tanks that exist in Telangana. These tanks were neglected all these years," he said. The chief minister repeated his party's election promise of waiving farm loans of up to Rs 1 lakh as early as possible. He said that his government would encourage modern farm technologies and research in agriculture sector.

According to the chief minister, agriculture scientists across the glob feel Telanagana is best suited for growing seeds. "Scientists have said that Telangana is a region which can be developed into a seed development centre. All the 10 districts are conducive to growing seeds. We intend to make Telangana the seed bowl of India by encouraging research on seed development," he said. The Acharya N G Ranga Agriculture University in Hyderabad has already developed a variety of seeds of different crops, he said.

"However, to attract new investments and setting up industries, the existing power scenario needs to be improved. Telangana is a power-deficit state. In the next five years we will enhance power generation capacity to 20,000 MW. Of this, 1,500-2,000 MW will be renewable energy, mainly solar," he said. “My government intends to make the state power surplus in the next three years," he said. Right now Telangana has about 4,000 MW power generation capacity but consumption is about 8,000 MW.

Rao said adivasis, dalits and backward class (BC) communities were denied opportunities for progress and development all these years. "Their dismal plight needs to be changed. I will personally ensure that the welfare schemes meant for them are effectively implemented," he said. In the next five years, as promised in the election manifesto of the Telangana Rashtra Samiti, Rs 1 lakh crore will be spent on the welfare of STs, SCs and BCs.

Out of this, Rs 50,000 crore will be for dalits alone. To ensure that no irregularities happen, Rao said he would keep all the welfare departments directly under him. As promised, Rao said, his government would provide a pension of Rs 1,000 to the aged and widows, Rs 1,500 to the disabled and Rs 1,000 to beedi workers. Besides, houses with two bed rooms, one hall and kitchen, along with bathroom in 125 sq yard would be constructed for the economically backward, he said.

The chief minister has promised special Telangana increment for all state government employees and salaries on par with that under the Central government.

Rao also made his intentions clear on protecting the brand image of Hyderabad and further enhancing it. Rao said he intends to make Hyderabad slum-free and develop it as an international city with most advanced infrastructure and facilities. The chief minister has not mentioned anything about protecting the lakes in and around Hyderabad, which are increasingly encroached by real estate developers, and environment protection.