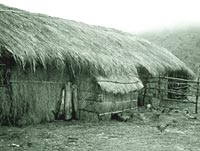 local residents, politicians and activist groups are steadfastly resisting the Uranium Corporation of India Limited's (ucil) latest attempt to mine uranium from Meghalaya's Domiasiat village, which has the largest reserves of the radioactive metal in India. The public sector undertaking's officials met Meghalaya chief minister (cm) D D Lapang recently and sought his permission to execute the Rs 450-crore project.

Though ucil has been trying to gain access to the region for the past three decades, it has stepped up its efforts in recent times. The state's uranium deposits have now become crucial to India's nuclear programme because the mines in Jharkhand's Jaduguda town -- the sole source so far -- are running out of reserves. The company is, therefore, dangling major incentives to get a toehold in the area.

But Lapang is wary. "We do not want to jeopardise public health by rushing into any decisions. Studies will be conducted and expert opinion sought on the impact of the mining activity," he points out.

It is noteworthy that the Khasi Hills Autonomous District Council (hadc) -- the nodal body which governs the district, as provided for by the Constitution's sixth schedule, and also owns the land in question -- has decided to withdraw its temporary clearance to ucil for survey and exploration of the area. "In any case, the authorisation did not imply that the company could commence commercial uranium mining in Domiasiat," clarifies David Langwi, chief executive member of hadc.

Ironically, ucil can override local opinion if the Union government invokes the provisions of the Atomic Energy Act, 1962. As per the legislation, the Centre has the final say in resolving nuclear issues. That the company has not even carried out an environmental impact assessment makes the people of the state feel more apprehensive. "We cannot allow ucil to overlook the health hazards posed by radiation," stresses Dino D G Dympep of Meghalaya People's Human Rights Council, a non-governmental organisation.

S Q Hoda, the regional director of the Atomic Mineral Directorate for Exploration and Research, which comes under the Department of Atomic Energy, says: "Adequate precautions will be taken to ensure that the people are not imperilled." However, Jaduguda's experience gives the lie to his claims. People living in the vicinity of the ucil-run mines there are said to be suffering from long-term effects of radiation.

It was in 1972 that the atomic mineral directorate confirmed the presence of high-quality uranium deposits in the area (see box: Land of yellowcake).