Users may soon have to pay for what they see online 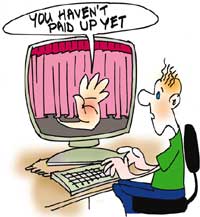 'You only see what you pay for', could sooner than we thought, become the motto of Internet providers in the us. Cable and telephone corporate giants are contemplating how they can control what people see on the Internet, via cables. And this time round, there are charges that accompany their services. The move clearly threatens to transform the free Internet of today into a private, branded and saleable commodity.

The way cable and telephone companies envisage the Internet, those with the deepest pockets -- corporations, special-interest groups and major advertisers would get preferred treatment. Everyone will have to pay.

Companies have hired what the us likes to call lobbyists. They want the us government to permit them to operate Internet and other digital communications services as private networks, free of policy safeguards or governmental oversight.

Ed Whitacre, chairman and ceo of AT&T, tells Business Week: Why should they be allowed to use my pipes (cables and phone lines)? The Internet can't be free in that sense, because we have made an investment, for anybody to expect to use these pipes (for) free would be nuts to believe that!

The reason why cable companies and service providers are so keen to get the Internet under their control is the so-called convergence, where different media formats are getting bundled into a same delivery mechanism video, voice and data communications flowing into our televisions, pcs, cell phones everything would soon be under the same unified command of the cable companies.

Many cable corporates have begun to test out a technology called the 'deep packet inspection'. It allows them to track users, even if they use different computers at different times to access the Internet. The technology is already in use, though presently, for other purposes, but companies have decided to redeploy these stealth spies to see how they can track individual users and make him pay wherever he is.

These 'deep packet inspection' technologies are partly designed to make sure that the Internet pipeline doesn't become so congested that it chokes the delivery of timely communication. Such products have already been sold to universities and large businesses that want to more economically manage their Internet services.

But what about freedom loving services like Google. If you think they will fight cable companies on this, you are mistaken. Google, other search engines and allied information providers too want to monetise the Internet, only that they want it in their favour. What we might see in a few years is an actual convergence of their interests a common ground where an Internet user is taxed, and companies get to share the booty. This may happen long before we see the convergence of media formats.

Given the facts, the Internet is all set to become a retail chain of brands rather than a retailer of free information. Moreover, if companies in the us are doing it, Indian cable and telephone companies will not be far behind. But they of course, need to get their revenue model working first.