Keeping the desert at day

The extent of desertification of grazingland in North China has reached crisis proportions. Effective governmental policy is needed to maintain an ecological balance between livestock numbers and pastureland 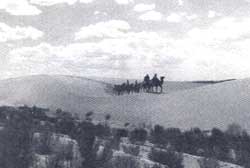 ABOUT 10 million ha of trees have been planted as part of a 'Green Wall' scheme, to address the problem of desertification, in North China. By the end of the century, the government plans to complete construction of the 7,000 km 'Green Wall' which stretches from eastern inner Mongolia to the Xinjiang Autonomous Region. But this flaunted move of the government may do little to save the country from desertification. More than trees, the country needs a policy for its dryland areas, says research.

Dennis P. Sheehy, in Ambio (vol 21 no.4), warns, "In north China, desertification of steppe grazing land is reaching crisis proportions". An estimated 56,000 sq km of land in the last 100 years have been degraded. Another 158,000 sq km is estimated to be moderately or slightly desertified. As a result, 13 deserts, making up 13 per cent of the nation's land area, have been formed.

While the cold, dry climate has been partially responsible for desertification, government policies have aggravated the situation enormously.

In north China, there is a very short growing season of between 90 to 150 days. This makes the area suitable for nomadic agriculture. In contrast, the Chinese government has agressively promoted crop-based intensive agriculture -- a model it has taken from the highly-productive irrigated areas. For this, as well as political reasons, the government encouraged migration of the Han people from other over-populated agricultural regions. As a result, there has been an increase in the number of grazing animals -- in one area by 330 per cent, but grazing land in the same area has been drastically reduced. This pattern has put these fragile cold desert lands under intense pressure, leading to their degradation.

Even the traditional livestock production patterns have been disrupted. The traditional users of this land knew that their resources, particularly fodder, were in short supply and developed systems to use it sparingly. Their plan was simple: fatten the animal during the summer months when plenty of fodder was available. During winter, feed the animals small quantities of collected forage. Earlier, animals were seasonally moved to different grazing lands. But the increase in the number of livestock has led to pastures being used throughout the year.