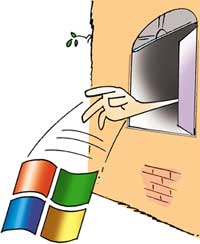 The Kerala government is encouraging schools and public offices across the state to install free software systems instead of Microsoft's Windows. "Microsoft wants to have a monopoly in computer technology. But as a democratic government, we want to encourage free software," Kerala's education minister M A Baby said. He added that Microsoft was not being banned, but the government was actively encouraging Kerala's 12,500 schools to switch to the Linux operating system, available free of charge

With its near 100 per cent literacy, Kerala is an important market for software biggies such as Microsoft. About 30,000 computers are already in use in schools across the state, and according to the state's education ministry, about 600,000 students opted to take free software training classes this year. Microsoft's public sector head in India, Rohit Kumar, said the company had tried to keep software prices low to make it accessible to schools, selling one version of Windows for Rs 1,250-Rs 1,500 per computer. "Under the School Agreement Programme, Microsoft has successfully created a very competitive pricing-value model, keeping in mind the financial constraints of educational institutions," Kumar said.

Baby disclaimed that the announcement was part of an ideological campaign against Western-made products. "We have great respect for the contribution made by the us and its European allies in the fields of art and literature and culture," he said. "But we are not happy with the monopolistic and imperialistic moves, both in political and economic spheres, made by these nations," he added.