Kerala looks for sand in silt 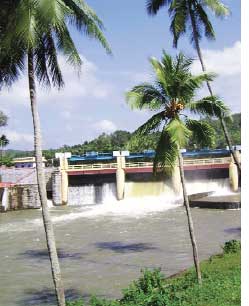 THE Thiruvananthapuram district panchayat is eyeing silt deposits in the Aruvikkara reservoir on the Karamana river to meet the construction sectors demand for sand. In October, the Kerala Water Authority (kwa) decided to invite tenders for desilting the reservoir.

kwa estimates that desilting will yield 80,000 to 300,000 cubic metres sand. Kerala is reeling from sand shortage as very little sand is available on the riverbanks and there is a ban on importing it from Tamil Nadu. The price of sand has shot up from Rs 15,000 to Rs 60,000 per truckload in the past two years. The boom in the construction sector is expected further increase the demand for sand. K P Thrivikramji, former head of the geology department of University of Kerala, said the sedimentary rocks along the course of the river have more clay than sand. Only 16,000 to 24,000 cubic metres of sand is likely to be found in the silt, he said.

The desilting is also expected to increase the capacity of the reservoir that according to kwa has reduced 43 per cent due to silt. The reservoir meets the drinking water needs of the city. Environmentalists warned that desilting may contaminate drinking water supply. Removing silt manually would release harmful chemical ions from the organic waste settled in the riverbed into the drinking water supply, said Thrivikramji. He said the silt may also contain harmful residues of pesticides used in the farms upstream.

Ajaykumar Varma, a scientist with the government run Centre for Earth Science Studies (cess), said good quality sand is more likely to be found away from the dam, in the sand embankments of the reservoir. There is gradual fining of sediments from the upper to the lower part of the reservoir towards the dam and average content of sand in the deposits would be higher where the streams confluence, he said.

Another scientist at cess, A S K Nair, said there was no harm in desilting as technology is available for removing silt safely. R Sridhar, of the environmental group, Thanal, said the project is proceeding without any environmental assessment or public hearing.