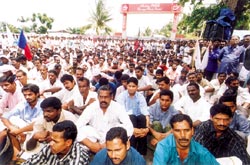 On December 16, Justice Balakrishnan Nair of the hc told hcbpl to close down the borewells at its Plachimada plant in Kerala's Palakkad district. The company has been given till January 16, 2004, to comply with the order and make alternative arrangements. The court has also asked the state groundwater department to conduct studies on the area's groundwater. The directives were issued in response to a writ petition filed by the Perumatty panchayat.

Though hcbpl promptly moved the hc against this order, a two-judge division bench rejected its appeal. The bench further directed that a committee be formed to investigate into the water situation in Plachimada and revert to the court on January 7, 2004. Crucially, the deadline to close down all borewells in the Plachimada Coke plant stands.

It may be recalled that the panchayat had earlier decided not to renew hcbpl's licence, citing depletion in groundwater levels due to its overexploitation by the company (see: "Calling the shots", Down To Earth, December 15, 2003). The village body also contended that the quality of water in the area's wells had deteriorated. Following this, the panchayat as well as hcbpl filed a series of writs in the hc.

While delivering the recent order, Justice Nair observed that groundwater is national wealth and belongs to the entire society. Noting that drinking water supply should get precedence over industrial use, he stated: "...It can be seen that there is heavy exploitation of groundwater." However, the hc made it clear that the panchayat should renew the company's licence if it was not extracting groundwater from the area.

"We see this as a very favourable development," exults Perumatty panchayat president A Krishnan. Janata Dal leader K Krishnanakutty also exudes optimism. In fact, the panchayat sees the directive as an indirect order to hcbpl to close shop. But C R Bijoy, a Coimbatore-based environmentalist and tribals rights activist, is sceptical: "In any case, the company has been largely depending on water supplied from outside for about a year. Also, what about the quality of water? Who pays for the ecological damage?"

Meanwhile, hcbpl has set up an India Advisory Board to guide the company on various issues including future strategies, corporate citizenship, social responsibility and corporate governance. The board has also formed an Indian Environmental Council. hcbpl's vice-president, corporate communications, Sunil Gupta, reportedly said: "Nothing is more important to our success than integrity and a strong sense of accountability in everything we do."

Interestingly, other village bodies of the state, too, appear to be drawing strength from the Perumatty panchayat. The Pudusseri panchayat of Palakkad has filed a writ in the Kerala hc against PepsiCo India, alleging that its bottling plant in Kanjikode is causing depletion in water levels.