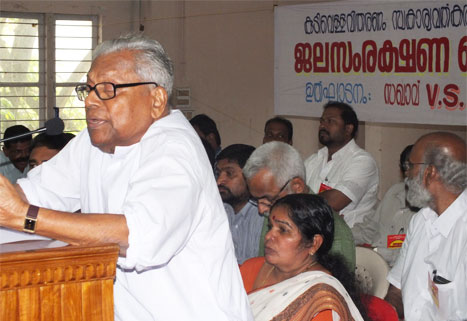 Kerala is facing unprecedented drought conditions. The state was declared drought-affected by the state government almost three months ago on December 19 last year. Last year's southwest monsoon was deficient by 24 per cent. In a normal year Kerala gets 2,040 mm of rainfall during the monsoon. Last monsoon the state received only 1,551 mm of rains. The northeast monsoon (from September to November), too, failed and it brought only 303 mm against the average rainfall of 464 mm. And in a representation recently submitted to the Central government seeking drought relief, it is stated that the groundwater level has depleted by four metres from its five-year mean value in many blocks of the state.

Surprisingly, one of the first acts of the government, on the water front, after declaring the state drought-affected, was to issue a government order (GO. MS 103/ 2012/WRD dt 30.12.2012 ), declaring its intention to establish a company—Kerala Drinking Water Supply Company Ltd—with 51 per cent of the equity to private sector. The government of Kerala shall hold 26 per cent of the total equity of 2.60 crore and the Kerala Water Authority, 23 per cent. The company is being set up for “constructing,  developing, maintaining and operating community-based water filtration and drinking water supply schemes across the state. This company would provide dedicated  small water supply schemes to housing colonies and small communities through decentralized water supply schemes on PPP basis.”

'Poor will get less clean water'
Activists are angered at this response of the state government to the worsening drought conditions, bordering on famine. They have got together to form the Water Protection Council with M K Prasad, environmental activist, as the chairperson. In the first convention of the council held at Kochi, V S Achuthanandan, the leader of the opposition, alleged that this is yet another attempt to privatise the natural resources of the state.

“With an average consumption of 30,000 litres a month for a family of five, even 10 paisa per litre will be a huge burden on  a middle class family,” said Purushan Eloor, one of the conveners of the Water Protection Council. This will bring about two sets of water users, one capable of paying high price who will get cleaner water and the other paying the current rates to the Water Authority and getting the less cleaner water, he adds. Evidence from world over has shown that prices have gone up after privatisation: 500 per cent in Manila, 300 per cent in Kochabamba and 700 per cent in Guinea.

Where will the company get water for filtering and supplying? The government order says the stat will provide raw water. “But this will eventually lead to privatisation of the water sources and wetlands,” said V S Vijayan, former chairperson of Kerala Biodiversity Board. He lambasted the government for making water a commercial commodity and pointed out that even the European Union has give a statement against commodification of water and that it called water a “heritage”. According to a Supreme Court ruling, right to life includes right to free air and water, and privitising water is as good as privatising fundamental rights, he said. N K Premachandran, former minister for water resources, pointed out how the government order lays down the condition that the Kerala Water Authority may sell bottled water on its own, provided the selling price is not less than the price at which the company sells. This means the company controlled by the private party will set the benchmark price of water in the state.

Premachandran alleged that a prominent  business house which already makes huge profits by tapping the oil sources of the country, has made a move to become the private partner in the PPP. Vijayan also pointed out that there is nothing to prevent the company from exporting the water.

The strong point of the “Kerala Model of Development”, touted the world over as exemplary, was the active role of the government in providing basic amenities free of cost or at minimal price. But during the past two decades there has been a trend reversal and the government is gradually withdrawing from key sectors like health, education, public transport and water.

On the lines of airport privatisation
According to the government order, the company shall implement this plan in the panchayats before March 2014, small  municipalities before March 2015 and in municipal corporations before March 2016. The immediate reason for establishing the company as provided in the government order is as follows: “In spite of thousands of crores of rupees being spent, Kerala has not been able to achieve 100 per cent coverage of supply of drinking water. This situation is more aggravated by increasing contamination (especially biological) of groundwater due to high density of population. This further leads to health hazards, causing huge burden on the state exchequer.”

How the formation of a PPP company is going to redeem the situation, especially with the drying up and contamination of existing water sources, is not explained. The company is referred to as a as CIAL-model company in the government order. CIAL or Cochin International Airport Ltd has become a byword for PPP success in Kerala. What is very conveniently forgotten is that unlike in the airline business, the commodity offered here is life essential, owned, not by anyone in particular, but by all.