Key to the treasure 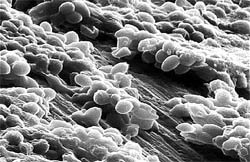 human genome mapping made news a while back. Science has taken a leap forward since then. Scientists have analysed all the important proteins in an organism -- the basic building blocks of life. Now they aim to find how these proteins interact with each other along with the dna and lipids.

Researchers at the North Carolina State University, usa, have played a key role in analysing the function of all the proteins of brewer's yeast ( Saccharomyces cerevisiae). For the first time, nearly all the proteins from a single organism have been produced, purified and tested. Researchers have studied the biochemistry of 93 per cent of the 5,800 proteins of the yeast. "This project is very exciting because up to now we haven't been able to look at how the proteins interact for an entire organism," says Ralph A Dean, professor of plant pathology at the university. "We can now tell what the important proteins of an organism do."

Proteins are the complex molecules created to carry out the instructions in an organism's genes. Proteomics, a term coined for research on how these proteins work, is an emerging field of scientific study.

The researchers chose to analyse the proteins of yeast because its genome was sequenced in 1996, and because it is the simplest form of life most closely related to humans. Yeast is a eukaryote, or single-celled organism with a well-defined nucleus. Much of its machinery is similar to humans in terms of the basic biology that makes the cell work.

In the yeast genome, genes for about 6,200 proteins have been identified. So far the team has managed to use genetic engineering to produce 5,800 of these proteins. They have purified them and attached each in a pair of duplicate drops. They have even tested the ability of each protein spot to bind to a target.

Each experiment generated a stupendous amount of new biochemical data. For instance, 33 new potential partners for six known calmodulin binding proteins were identified. By using their information on these proteins, the researchers were able to determine a common structure in many of the proteins that probably attach to calmodulin. In some cases, this was the first biochemical clue about the function of the otherwise mysterious proteins ( www.newswise.com , July 30, 2001). "While a lot still needs to be done, extending this analysis to the set of human proteins is clearly possible," said Michael Snyder, one of the study's researchers.