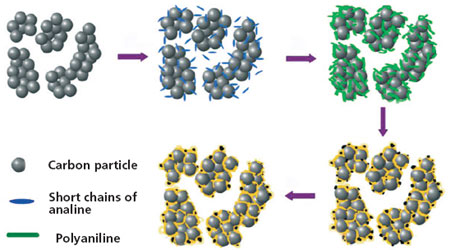 PLATINUM is a precious metal used as a catalyst in fuel cells. But the high cost of platinum restricts fuel cells’ contribution to global energy solution.

Researchers from Los Alamos National Laboratory and Oak Ridge National Laboratory have developed a catalyst made of cheap and easily available materials like polyanaline (PANI), iron and cobalt. They tested the catalyst in a fuel cell. A fuel cell is a battery consisting of an anode (electron-releasing electrode), a cathode (electron-absorbing electrode), and an electrolyte in between. A catalyst is an oxidising agent that starts or speeds up a chemical reaction while undergoing no permanent change itself.

Researchers replaced platinum catalysts at the cathode with polyanaline, iron and cobalt catalyst. They checked the consistency in performance and the oxidation reduction reaction (ORR)—a chemical reaction involving the transfer of electrons at high temperatures.

The fuel cell was found to generate electric current equivalent to the output of a fuel cell with a precious metal catalyst, the researchers described in a paper published in the April 22 issue of Science. Thus it promises better fuel efficiency and reduction in emission over gasoline combustion.

Co-author Piotr Zelenay said the polymer electrolyte fuel cell represents one of the most promising energy conversion technologies presently available for fuel cell applications including automotive transportation. “Never before observed in a single catalyst, high ORR activity with good performance stability has been demonstrated with materials derived from polyanaline, carbon and iron and/or cobalt,” he adds.

Similar catalysts developed earlier had good ORR activity but were unstable. “Cobalt and iron and iron as catalysts help transport oxygen in the human body and are a good example of applications,” says B Vishwanathan of National Center For Catalysis Research, IIT Madras.