Killed by a belch

Carbon dioxide, the killer gas in today's world seems to have been the culprit aeons ago too. It has been identified as the gas which possibly led to mass extinctions some 250 million years ago 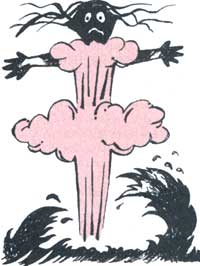 IT WAS 250 million years ago that life took its first beating - the worst ever - when mass extinctions marked the end of the Permian period. A group of American palaeontologists say that they have evidence to prove that the extinctions in the Permian period, which devoured 90 per cent of all genera in the oceans, may have been triggered by a belch of deep sea carbon dioxide (Science, Vol 270, No 5241).

Researchers Andrew Knoll of the Harvard University, Richard Bambach of Virginia Polytechnic Institute and State University and sedimentologist John Grotzinger of the Massachusetts Institute of Technology in the US, recognised a slide of a layered rock shown to them by a colleague, to be an inorganic carbon precipitate - carbonate - from the late Permian period.

Carbonates are usually produced from the remains of once living animals. During the five cycles of glaciation in the late Precambrian period between 600 million and 800 million years ago, however, carbonates precipitated directly from the seawater, without the help of living beings. This could have occurred when the concentration of dissolved carbon dioxide became very high.

The palaeontologists propose that the period witnessed a shutdown in the circulation of the deep oceans. Continents then came to be huddled in a supercontinent, Pangaea. With no continental ice sheets to chill surface waters, the deep waters became stagnant. As phytoplanktons on the surface waters continued extracting carbon dioxide from the atmosphere, converting it into organic matter that sank and oxidised to carbon dioxide, the result was a hike in the deep sea carbon dioxide content.