..and other dynamic stories on the politics of genetic behaviour. The evidence, of course, is scientific 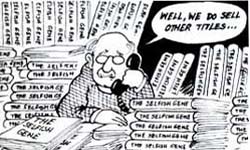 ONE peek at genetic behaviour and the microscopic world of cellular biology seems no less dramatic than the larger socio-political ethos of human societies. A team of two researchers has recently come up with some eye-opening findings following research on ants. The findings indicate that the interplay of cooperation and conflict is to be found at all levels of biological organisation, from genes to societies.

The Darwinian theory of natural selection says competitive selfishness is the driving force of survival. Altruism, or unselfishness, is inconsistent with the theory as it lowers the survival chance. British biologist W D Hamilton had provided an explanation for altruistic behaviour. Hamilton showed that altruism can evolve by natural selection if directed towards close genetic relatives who have the same genetic make-up.Thus copies of genes lost due to personal sacrifice by the altruist are compensated by the survival and reproduction of other copies of the same genes in the bodies of the beneficiaries of altruism. But, there is a catch: genes do not have address books. How do they recognise themselves in the bodies of different individuals?

The idea of genes recognising themselves was made famous by Richard Dawkins, author of the famous book Selfish Gene, when he used the phrase "green beard gene". Dawkins hypothesised a gene that gives its bearer some conspicuously visible external label, say a green beard, and also makes such individuals to be nice to other "green-bearded" individuals. However, Dawkins did not consider the existence of green beard genes very probable due to several factors. Nevertheless, the idea of green beard has remained a matter of considerable curiosity and interest. Thus "green beard genes" have come to represent such talked-about but non-existent genes.

Now, the first plausible example of a green beard gene has come from Laurent Keller of the University of Lausanne, Switzerland, and Kenneth Ross of the University of Georgia, USA. 'Keller and Ross have been studying the Argentinean red fire ant (Solenopsis invicta) which has been accidentally introduced into the US and has become something of a pest.

Keller and Ross have been looking for variable genes because this permits them to estimate the genetic proximity among different members of the ant colony. This is where answers to altruism among close genetic relatives lie, as predicted by Hamilton. Colonies of social insects like ants are the best place to look for examples of altruism as most individuals in these colonies are sterile workers who sacrifice personal reproduction and spend their entire lives assisting their queens to reproduce.

Keller and Ross identified a gene called Gp-9, which has some peculiar properties. This gene exists in two forms, which the researchers label as B and b. Such variables of a gene are called alleles. Each female ant inherits one copy of the gene from its mother and another from its father, and has any one of the three possible genotypic compositions: BB, Bb or bb.

The first peculiarity they found was that both workers and queens possessing the bb gene combination die early. This is not surprising as such genes, known as recessive lethals, are quite common. Many genetic disorders in humans are caused by recessive lethal genes when one bad allele remains harmless in the presence of a good partner. But two copies of the bad allele can be fatal.

However, the real peculiarity that Keller and Ross found was that while both BB and Bb types exist among the workers, only Bb types are to be found among the queens. Whatever happens to all the BB queens?

Shocking as it may seem, all BB queens attempting to reproduce are killed by workers who primarily have the Bb gene combination. This means that workers who possess at least one copy of the gene b (Bb workers) recognise the presence of b in the queens (Bb queens) and permit them to reproduce. But they kill all queens who do not possess any copy of the gene b (BB queens).

Keller and Ross conclude that b is a green beard gene as it permits its bearers to recognise other bearers of itself and be nice to them. What is equivalent of green beard here? In other word what is the label of queens possessing the gene b? It appears that BB queens and Bb queens smell different. Moreover, this smell has something to do with reproduction - BB queens are not killed until they begin to reproduce.

The researchers also found that Bb workers who involved in killing BB queens sometimes acquire the peculiar smell of BB queens and thereby become victims of aggression by other Bb workers.

Why do Bb workers kill BB queens attempting to reproduce? There appears to be indirect evidence that BB queens are so strong that if allowed to reproduce, they will outcompete all other queens, whereas Bb queens are moderate and will permit the coexistence of many queens in the colony. This is something that the workers seem to prefer . It is most remarkable indeed that workers possessing the moderate gene b can recognise queens who do not possess it. This is the moderate gene's strategy for survival: strike before your opponent does.