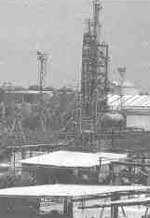 WHEN the Gujarat High Court ((-,Hc) orders for closing down 756 units in and around Ahmedabad on August 5, and 26 major industries in Nandesari estate in Barcida on September 5 (Down To Earth, Vol 4, No 9) were not followed, contempt petition against government officials was admitted. However, the role of the state, including the Gujarat Industrial Development Corporation (GH)c) and the Central Pollution Control Board (CPCB), was highly suspect right from the beginning according to the pro-closure lobby.

Among the categories brought to book were those industries producing/using hazardous chemicals or having carborusing units.

In Rajkot, the infamous saree printing and dyeing units of Jetpur were asked by the GHc on July 31 to comply with pollution norms by August 21, or face closure. In 15 days, 10,000 in of pucca channels were constructed and 45 ghats (for washing sarees) were demolished- But by August 21, when the CeDtral ghat and central effluent treatment plant were not fulfilled as per co orders, the Rajkot collector clc 1,247 saree printing units on August 22.

On September 6, 15 days after units were ordered to close, the co relented that Jetpur dying and prini units may be restarted in a manner no washing is done on the river hall and an effluent treatment plant promised by the industries is installed.

Earlier on August 8, the Court asked the government to submit a tir frame by August 31, for cleaning small rivers. The court observed only if small rivers like Mini river poflution-free, bigger rivers can hoped to remain clean.

Emboldened by the Cou4 activism, a petition was filed by DyeLn Bleaching, Finishing Units Wmk4 Union on the problems caused by urn in Surat and surrounding areas. 1114 the petition came for hearing c September 4, the Court ordered showcause notices be issued to industries of Surat, Udhana, Bheshl Pandesra and Sachin for air, water ar environmental pollution.

P R Ghanekhan, former m. her secretary, CPCB, denounced industrialist-politician nexus, lamented that the CPCB does have necessary resources to in, for pollution - like measm toxicity in effluents.