Killer within the bug 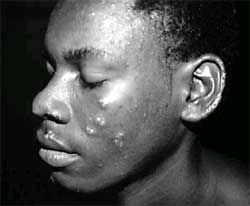 the scientists of National Institute of Allergy and Infectious Diseases (niaid), Washington, usa , have developed a vaccine, which would protect people from Leishmaniasis transmitted by sand flies and known in India as kala azar. Different species of the parasite can bring about different symptoms, which range from nose, throat and mouth infections, painful skin lesions, or fatal infestations of the internal organs. The visceral Leishmania or kala azar is endemic in some areas of Bihar, Uttar Pradesh and West Bengal. The disease kills more than a thousand people each year in the country. Till date, an effective vaccine against the disease is not available.

During their 30 year long study on the disease, researcher Jos Ribeiro and his colleagues realised that people bitten by the sand fly developed resistance against the disease. This led the scientists to believe that the fly's saliva had some component that helped the person develop resistance. Generally, the saliva helps the pathogen gain entry into the host cell by attracting macrophages (cells that provide immunity to the body) to the feeding site but reduce their ability to destroy the pathogen. "Rather than targeting the parasite, the researchers have produced a vaccine based on the saliva of the insect that transmits the parasite," says Anthony S Fauci, director at niaid .

A protein, sp 15, isolated from the fly's saliva was found to protect the host. The scientists prepared a vaccine based on this protein and tested it in mice. When vaccinated mice were infected with the parasite mixed with the fly's saliva, those immunised earlier had smaller skin lesions, and their infections cleared within six weeks. Unvaccinated mice developed large skin ulcers and did not eliminate the parasite.

Scientists are now testing the vaccine on monkeys and dogs, which are natural reservoirs of the pathogen. Human trials are at least three years away. The vaccine lays a model for others effective against other forms of visceral Leishmania, which is more common in India.