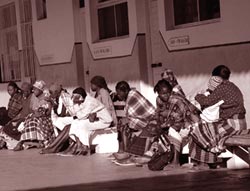 aids is threatening the traditional agricultural practices of Mozambique, indicates a study conducted by the Food and Agriculture Organization (fao). The finding is alarming, as more than 1.3 million people in the country are suffering from the disease.

During the fao research, about 90 men and women from three communities of the Chokwe district were interviewed. At least 45 per cent of the respondents from aids-affected households said that, due to the 'disease burden', they had reduced the area under cultivation and 60 per cent stated they had decreased the number of crops grown.

As per the study author Anne Waterhouse, the results show that aids is likely to have a "highly negative" impact on local knowledge about seeds; because it affects the passing of farming know-how from generation to generation, as infected adults slowly become incapacitated. "Most of the farmers use seeds that they produce themselves to grow their crops; this way they pass on the knowledge about how to identify, improve and conserve that seed," explains Waterhouse, adding: "But if the farmers stop producing, the knowledge is not passed on."

It is important for Africa not to lose its traditional crop varieties because they act as an 'insurance policy' against rampant hunger. They are adapted to local conditions and have produced a minimal harvest even during Africa's recurrent droughts. Moreover, hybrid or improved seeds, which do not withstand drought so well as the traditional seeds, require inputs such as fertilisers, pesticides and plentiful water, which are often beyond the means of the poor farmers.