Magnetic field of devices like hair dryers can damage brain 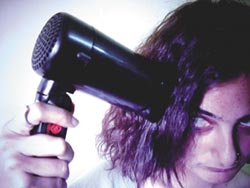 a recent experiment adequately illustrates the hazards of electromagnetic radiations of commonly used devices. During the experiment rats exposed to magnetic fields ended up having damaged dna of brain cells. The rats were exposed to a weak magnetic field for 24-48 hours. Those exposed for 48 hours had more damaged dna. Henry Lai of the us-based Washington University, who conducted the experiment, says the exposure increased brain cell apoptosis -- a process wherein the cell destroys itself since it cannot repair on its own.

The findings, published in Environmental Health Perspectives (Vol 112, No 3, March 2004) have implications for everyday life. According to Lai, prolonged exposure to low-level magnetic fields, such as those emitted by hair dryers, electric blankets, razors and mobile phones, could damage human brain cells. "We do not use hair dryers or electric razors for more than a few minutes each day. However, the exposure to magnetic fields from these devices, held close to the head, is quite high," he says, adding: "In rats the harmful effect accumulated over time. Therefore, the big question is if one uses a hair dryer for five minutes every day, will the harmful effect build up? Nobody knows as of yet. But the results raise the possibility that it might. Thus people should limit their exposure as much as possible."