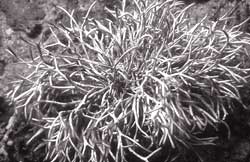 about 470 million years ago, land plants had bloomed for the first time. But scientists, till recently, were unable to track down their family history. Now, by studying the gene sequences of common fresh water algae, researchers from the University of Maryland, usa, have traced this family tree. They have identified a group of algae that are the closest living relatives of the first land plants. By doing this, they have moved a step closer in understanding how land plants evolved and came to dominate the terrestrial biosphere ( www.unisci.com , December 17, 2001).

During their study, Maryland professor Charles F Delwiche and doctoral student Kenneth G Karol found that the closest living relative of the first land plants is Charales, a group of green algae, which today survives in fresh water worldwide. The researchers were assisted by Richard M McCourt of the Academy of Natural Sciences in Philadelphia, usa, and University of Maryland student Matthew T Cimino.

"Science has long believed that land plants are derived from primeval algae that became adapted to live on land. But we weren't sure exactly how this happened, or which living algae were most closely related to land plants," said Delwiche. "Plants didn't write diaries or letters for us to study, but they do have genetic sequences that can reveal their evolutionary history. Through our study we have revealed this important part of the life tree."

Scientists have thought that Charales and another group of algae called the Coleochaetales were almost equal cousins of the first land plants. Both groups share with land plants similar characteristics of growth, reproduction and cell division. But it wasn't until Delwiche and Karol studied the dna sequences of four genes from 40 different plants and algae that the lineage could be traced with certainty. "The dna of the Coleochaeteles shows many similar characteristics to land plants, but the Charales are even more closely related," said Karol.

"Our data confirms that land plants and the Charales both evolved from a common ancestor that was a fairly complex organism," said Delwiche. Even though both Charales and land plants can be traced back in the fossil record over a period of more than 400 million years, their common ancestor has not been identified in the record. "We now can make specific inferences about what this organism looked like. It wasn't just some sort of amorphous pond scum. It was made up of branching threads and reproduced with eggs and sperm."