Kishanganga dam: court at The Hague seeks details of its environmental impact

Final judgement deferred as India, Pakistan fail to submit details of environment flows and impacts of their hydropower projects 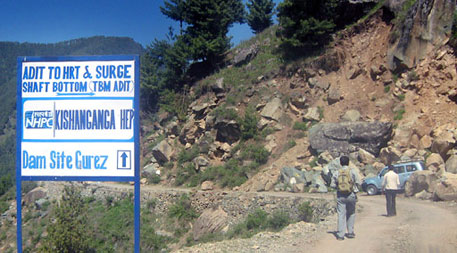 The Permanent Court of Arbitration at The Hague has allowed India to divert the waters of the Kishanganga river for its 330 MW run-of-the river hydro-power project. But the court on February 18 deferred its final judgement in the case because both India and Pakistan failed to provide information on minimum environmental flows to be maintained in the westward flowing Kishanganga (known as Neelum in Pakistan) and Jhelum rivers for development of hydropower projects. What's more, there was insufficient data from both India and Pakistan on environmental impacts of the construction of dams in these rivers. Pakistan is constructing Neelum-Jhelum Hydro-electric Project (NJHEP) downstream of India's Kishanganga Hydro-electric Project (KHEP).

Pakistan had knocked on the doors of the court for arbitration in 2010, questioning India's plans to divert water from the Kishanganga into the Bona Madmati Nallah for KHEP.  Since then, construction work at the site has been stalled, though India continued to build structures below the river bed. Pakistani authorities say that the diversion violated provisions of the Indus Waters Treaty of 1965.

The seven-member Court of Arbitration chaired by Judge Stephen M Schwebel of the United States of America requested the parties to provide additional data concerning the impacts of a range of minimum flows at the KHEP dam. It asked India for details on power generation at KHEP and environmental concerns from the dam site at Gurez in Jammu and Kashmir to the Line of Control (LoC). From Pakistan, the court sought details of the impact of power generation from NJHEP, agricultural uses of water downstream of LoC to Nauseri and environmental concerns at and downstream of LoC to Nauseri (see map). 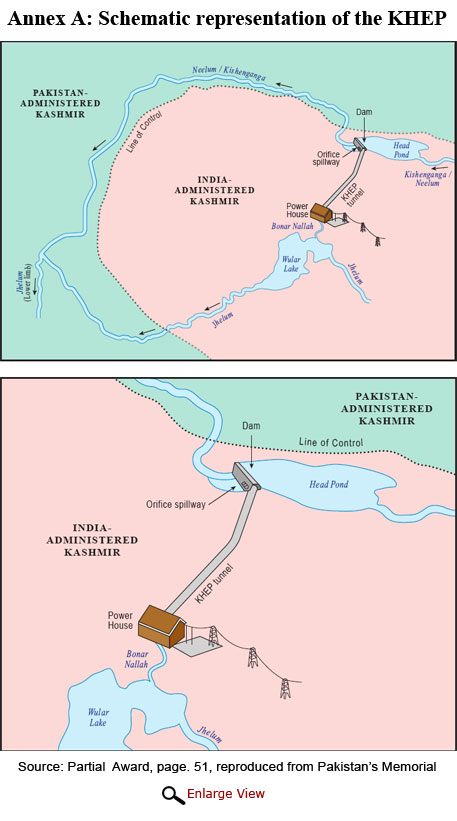 The court upheld India's right to divert the water and at the same time Pakistan's right to receive the minimum flow necessary for its use.

The court rejected the minimum flow of 3.94 cubic metre per second (said to correspond to the lowest recorded flow over a 30-year period) which was established as a minimum flow in Jhelum river. While 3.94 cubic metre per second is the minimum flow India committed to maintain in its operation of the KHEP, the same was considered sufficient to accommodate Pakistan’s right under Indus Water Treaty and customary international law to the avoidance or mitigation of environmental harm.

According to Himanshu Thakkar of South Asia Network for Dams, Rivers and People (SANDRP), there is a need for cumulative impact assessment of the dams constructed in westward-flowing rivers from India to Pakistan by both the countries. “Although the partial order is not available with me, time and again we wrote to the government of India against illegal dumping of silt in the river course, which has impacted the people staying there. Therefore, a cumulative environmental impact assessment to necessary before going ahead with the diversion of the water,” Thakkar said.