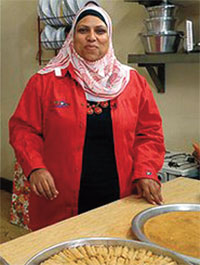 When an Egyptian news channel reflecting the aims of the Tahrir Square revolutionaries introduced some light relief to the schedules, it inadvertently created a new star more popular than the news coverage, reports the BBC. Before Ghalia Mahmoud in her 30s became the star chef, her life consisted of cooking for her employer and caring for a demanding family back home in Warra’a, one of the city’s poorest suburbs.

Then her employer’s brother asked her to host a cookery show on his channel 25TV. He kept the concept simple: no more fancy cuisine using unaffordable ingredients. As Ghalia cooks she talks, taking calls from across East Asia, sorting out issues like how to deal with children who are fussy eaters. Her show has become a hit. So much that a group of Egyptians, unimpressed by the list of candidates for upcoming presidential election, issued an online plea for Ghalia to run for the highest office.