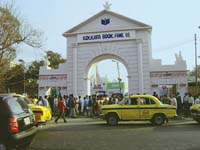 One last time, West Bengal chief minister Buddhadeb Bhattacharya promised last year. How can such a noble event be denied its "traditional" home? Next year, we'll have an alternative venue ready. The Indian Army, custodian of the maidan, reluctantly agreed and hundreds and thousands of feet trampled the maidan's already balding green, kicking up clouds of dust.

The rise in respirable particulatematter (rpm) at the maidan during the book fair has been an issue since 2001 when a pollution control board studyfound a dangerously high count of 1,136 micrograms per cubic metre at the venue. Anything above 100 is a threat.

As 2007 loomed Bengal's literature-loving chief minister proclaimed fair at the Maidan this time too. Because tradition says so and because the Publishers' and Booksellers' Guild say so. The military brass at Fort William was bypassed and permission got from defence ministry in New Delhi.The guild started putting up stalls.

On January 17, environmentalists challenged the decision in the high court. The court stopped work pending clearances from various civic bodies. But some more string-pulling and overnight the guild had permits from Kolkata Municipal Corporation, state pollution control board, fire brigade and other state agencies.

Decorators got back to work. But on January 25, the court again halted fair preparations till the next hearing on January 29. The guild fumed. And Subhas Chakroborty, West Bengal's maverick transport and sports minister, lost it "If the order goes against the fair we will gherao homes of environmentalists who had moved court."

But on January 29, two days before the fair was scheduled to start, the court banished fair from the greens. The rescheduled fair was relocated to Salt Lake Stadium.