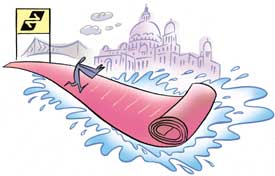 When Kolkata turned into a 'waterworld' in September, there was much talk of the city's abysmal drainage system. The flooding was blamed largely on unplanned development over the city's natural drainage mechanism--its network of canals and wetlands. A glaring example of such development is the Kolkata Metro Railway's Tollygunge-Garia extension project, being built over the Tolly's nullah.

Also known as the Adi (old) Ganga, the canal, which was once a river branching out of the Hooghly, serves as the principal surface water drainage channel for a large part of southern Kolkata and its suburbs. However, 300 massive concrete pillars that are being built in the middle of the canal bed to support the metro's 8.5 km over-ground extension tracks, have silted up the canal bed (six out of seven stations of on this extension will be elevated ones). "For the last three years, this has been a regular event, in fact in some places along the nullah the water level hasn't even gone back to normal," says Mohit Roy, an environmental engineer. Roy is among a group of environmentalists fighting to preserve the canal. The project had been challenged in the Calcutta High Court, but the court allowed it saying since metro is part of the Indian railways, it requires no environmental clearance, in consonance with the railway act, which mentions that railway administration can construct over any land or waterbody.

Railway officials maintain they have used single circular columns set on pile foundations to minimise obstruction, and that they have paid Rs 7.14 crore to the irrigation department for deepening and widening the canal. But the truth is there has been no widening of the canal and according to Roy, 4,350 families have been evicted instead. Besides, it would save the officials the difficult task of evacuating squatters along the banks.

"In fact, the pillars should be taken down," says T K Ghatak, Kolkata Municipal Development Authority's senior geophysicist. "It's not as if we really needed a metro extension. There was a reason why the original metro track was built till where it is now and not extended further south. But in this market driven economy that's been forgotten." Kolkata has, for several decades, been expanding southwards on what's largely swamp and wetlands without paying any attention to drainage and sewer. The city needs to think of alternate drainage options, says Ghatak.

Tolly's nullah had once been the main stream of the Ganga flowing towards the Bay of Bengal through the South 24-Parganas. There were a number of rich towns and religious places along its banks. The channel served as a major navigation route between the city and Bengal's eastern districts even during the British era. But neglect of waterways in general and other factors like population pressure and unplanned urbanisation ultimately turned it into a sewer channel. There had been plans in the late 1990s to re-introduce navigation on this canal, as part of a citywide water-based transportation system but the metro extension project seems to have sounded the death knell to all such plans.